Ryan at the corn bed. By Margo True, Sunset food editor I’ve been out of town for a while, and just before I left I walked dow... 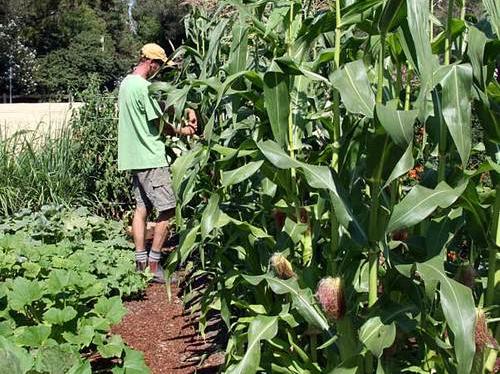 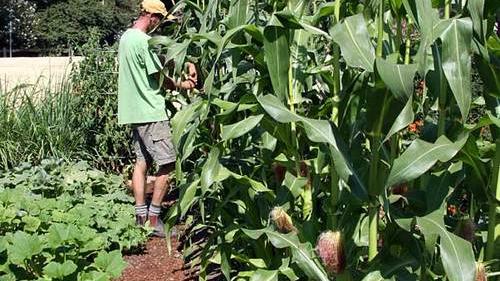 Ryan at the corn bed.

I’ve been out of town for a while, and just before I left I walked down our corn plot. The plants reached my knee. Now, two weeks later, they’re eight feet tall! Having never been around corn, this seems to me to be the sort of thing that only happens in fairy tales.

Our corn’s rate of growth isn’t its only amazing aspect, though. It’s the sheer size of it, too, especially when you think of how corn began millennia ago—as a small, lowly grass. It’s we humans and our cultivating and selecting that have turned this innocent plant into a maize monster. (Although, if you’ve read The Omnivore’s Dilemma, it’s hard not to see corn cleverly directing its own evolution by being so irresistibly tasty and useful.) But what a beautiful and delicious giant…

I snap back to the present tense when Ryan Casey, Sunset’s test garden coordinator, points to the fountainlike tassels at the top of the stalks and reveals more fascinating stuff about corn. “The pollen comes down from here. If you shake the corn”—he grabs a stalk and jostles it—“you can see the dust.” A soft yellow spray blows sideways from the tassels, settling down onto the silk sprouting from the baby ear of corn below. “It drops onto the silk, and each thread sends a message to a kernel inside to grow. If you have two varieties of corn planted next to each other, you might get two kinds of kernels on one ear. So if you’re growing different types and you don’t want them to cross-pollinate, either plant them 100 feet apart or wait two weeks between plantings, so one is still maturing while the other is dropping pollen.”

On the other side of the size spectrum: Our first potato. Ryan’s hand went down in the Yukon Gold patch like a deep-sea diver and came up with a potato the size of a cherry. I boiled it in a tiny bit of water later and ate it…sweet and tender.

Then on a more somber front, I’m sorry to report that our chickpea experiment (see Struggle of the Sprouts) has failed. Our lone chickpea succumbed at last, probably because we planted late in the season (chickpeas need a cool-weather planting, says Ryan.) Our attempt to grow it in pots met a similar fate. Oh well…we tried. There’s comfort in the corn.