On Friday night, Ruby was in the Chicken Hospital (a.k.a. a cardboard box in my office, to keep her calm and warm).  She’d recovered i... 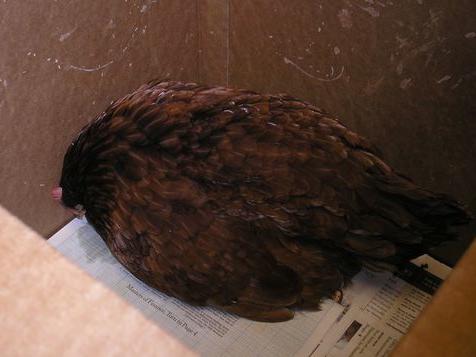 On Friday night, Ruby was in the Chicken Hospital (a.k.a. a cardboard box in my office, to keep her calm and warm).  She’d recovered in there once before, so I had hopes she’d snap back again—since Team Chicken had collectively decided that we’d stop taking our hens to the vet if they got sick. Whatever help we could give them would have to be enough; nature would have to take its course.

When I left the office, Ruby was alert and pecking at food, although we’d caught her looking woozy a few moments before, which was new. But the next morning, she didn’t croak hello at me when I opened the box, or give me her bright brown stare. She’d been unsteady on her legs the night before, and now she couldn’t stand at all—and the swelling in her abdomen hadn’t receded. She alternated between nodding off and thrashing around frantically in an effort to get up or just change position. The poor thing was trying to get up using her wings. She needed to be put out of her misery. 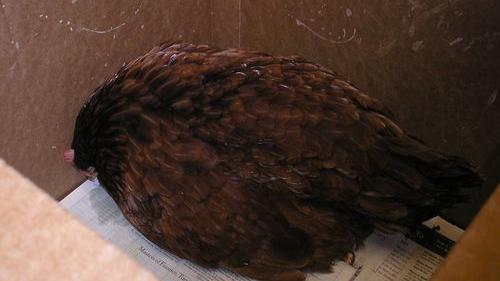 I know, I know. She’s a chicken and a farm animal. But I finally realized that my attempts to view her that way had been hopelessly unsuccessful. Ruby was, to me and several others, a pet from the day we got her. Helping her pull through as a chick, and then later, too, I’d become more invested in her health and happiness, kooky as that sounds (I can imagine a few of the farmers I’ve met, shaking their heads and smiling at this affection for a $4 bird.)

I told her she’d been a good chicken and patted her soft feathers and promised her she’d be pain-free soon. Basically, I said goodbye. I was surprised it had taken me so long to acknowledge that I’d bombed at having a proper urban farmer attitude. But it made justifying the next step easier.

Johanna had offered to euthanize her in the time-honored farm way—with a sharp blade. Effective, quick, and free. However, it was now the weekend. So, yes, back to the vet I went with Ruby.

The vet, Curt Nakamura, a chicken owner himself, felt Ruby’s abdomen and confirmed what I’d thought: Egg yolk peritonitis. Only this time it was much worse. The yolk, instead of remaining liquid inside the body cavity, had congealed, and would require surgery to remove. I said we’d chosen not to treat her. Then he and the veterinary technician, Liz Hughston, explained that they would first sedate Ruby, and then give her a lethal injection. Still, as chickens do, she’d probably still thrash around after she was dead; it’s the nerve endings giving a final hurrah, I guess. Nakamura asked if I wanted to be there for that, and said, in a remarkably soothing voice, “It can be upsetting.” I thought about it for .5 seconds and left the room.

It was over in less than 10 minutes. I’d brought a soft old green pillowcase for them to wrap her in, and they gave her back to me, carefully wrapped in it and then a plastic bag. She was warm inside and so light. It was a huge relief to know she was no longer suffering.

We’ll bury her on Monday. 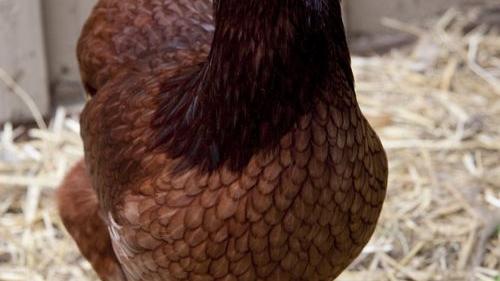