How We Fought Mites in Our Beehive

Will formic acid be necessary to kill off mites and let a drone brood survive? 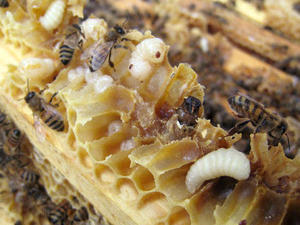 This week, following Randy Oliver’s advice from last week, we prepared to kill the brood in Veronica and treat once again with formic acid, understanding that if we didn’t take this drastic step the hive might be doomed to fail against the mites.

We first wanted to get a mite percentage of infestation to be sure the treatment was necessary (and we were curious). To get this, we gathered a sample of bees taken from a brood frame into alcohol, then counted the mites that fell after washing them and divided the mite count with the number of bees in the sample. A few must die for the good of the hive!

So, we opened up our Veronica hive on Wednesday to get the bee wash sample. There wasn’t any brood in the top box (they are still filling all ten frames with honey!) so we took the box off to get to the bottom box.  What a task that was!  There was so much drone and burr comb in between the two boxes that it was extremely difficult to get the two apart.  It took two of us lifting the estimated 80-lb. box vertically while using the hive tool to break the propolis seal at the same time! 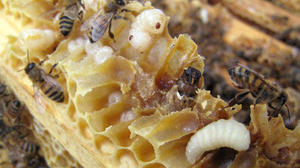 What we found in the bottom box was a shock! We were not expecting drone brood (white larva in photo) this early in the year, but as you can see in the picture we have LOTS of drone comb and the mites are taking advantage. (Click on photo to make larger—I count at least five mites in that picture. How many do you count?)

We sampled about 125 bees from the brood frame into alcohol and only got five mites after washing, which would be a 4% infestation. However, I am not convinced this number is accurate. For the first time EVER, I saw several bees in the hive with mites on them, and the drone brood is covered in mites. We scraped off the ruined drone brood and burr comb from the top of the frames in the bottom box and put it in a plastic bag. Just in the bag I counted at least ten mites. And that’s just the number that didn’t jump off the brood and onto another bee while we were scraping!

In any case, we can see that Veronica is doing very well, despite the mites!  She has at least sixteen frames of bees in her two boxes, which according to Randy is strong enough to hold up against the mites. Yay! We returned to the hive yesterday to scrape off the remaining burr and drone comb. We also inserted the drone frame, now that we know how eager Veronica is to make drones!  We hope this will be enough to keep the mites under control, for now.

Our next concern?  Swarming season approaches!