Sad news: Our flock goes from six to five

Sick chicken Alana did not recover. Here's what happened: On Friday, she was crouched in the coop with a droopy tail and no energy. On ... 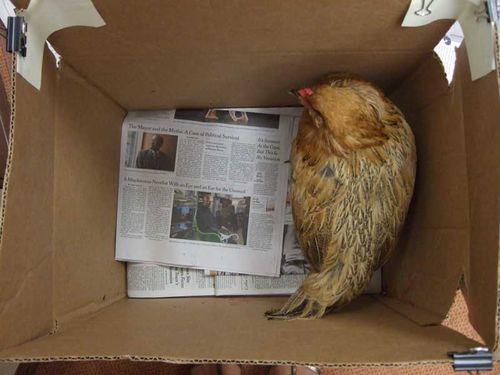 Sick chicken Alana did not recover.

Here’s what happened: On Friday, she was crouched in the coop with a droopy tail and no energy.

On Saturday, she seemed better. Perked up, walking, eating, drinking.

By Monday, she was worse again. So I brought her inside so I could keep an eye on her. In a cardboard box in my cubicle. We gave her graham crackers and yogurt and a couple of strawberries, which she demolished within minutes. That was a good sign, the vigorous appetite. 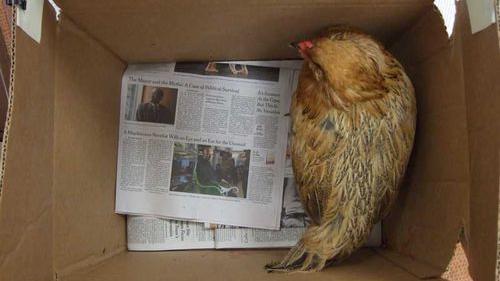 Photo by Emily Chow, Sunset editorial internTuesday passed with not much movement. On Wednesday, she had her best day ever when I gave her a bite-sized piece of glazed doughnut.We started to think she was faking.

Any animal who goes after a doughnut with that much gusto has to feel at least okay. At lunch, I took her outside, and while I ate yogurt, she puttered around (actually walked a little!) eating a small bunch of oxalis and a nascent sow thistle. (Weeds were her second favorite food. Behind doughnuts.)

One of her toes seemed splayed strangely, so I started to think that perhaps she had injured her leg somehow, that her reluctance to walk was physical injury rather than overall malaise. I actually put her back in the coop overnight, hopeful that she would continue to improve.

Thursday, I thought she’d vanished. She wasn’t in the yard with the other chickens, she didn’t seem to be in their house, she wasn’t hiding in a corner anywhere. I actually came inside to ask the other chicken-keepers if they’d pulled her earlier in the morning. No, they hadn’t.

I went back out and gave the coop another look. She was way, way up in the house, on the topmost roost. She looked at me, and it was clear that she either couldn’t or wouldn’t come down.

The chickens put themselves to bed each night and huddle together on the roosts, but it is highly unusual for them to not hop down when the sun rises. I reached into the house and scooped Alana up and brought her inside.

But no tempting morsel of food seemed interesting to her. I offered yogurt, a delicious hamburger bun, layer pellets, fruit. Nothing. She ignored her water. And she wouldn’t stand up at all. She did, a couple of times, reach for the hamburger bun, but she was so weak that she would just fall over.

We decided last year that we would give our chickens limited veterinary care. (After our other Ameraucana Ophelia had an impacted crop last year that required surgery.) Not to be cruel, but as an acknowledgment that these are farm animals. Plus, not very many vets will even see chickens, and the kinds of maladies they come down with are not always effectively treatable.

As Jody Main told us, “If a chicken goes, she goes fast.”

And yet, on Thursday, Alana seemed to be going, but not fast enough, honestly. I got spooked by the idea of a chicken dying in my cubicle.

Margo, on the other hand, only wanted to know what was wrong with her. She rightly pointed out that the chicken had been notably sick for five days, and we had no plausible guesses. We thought maybe she was egg bound, but we couldn’t feel an egg. We thought she’d injured her leg, but there was no apparent injury. We just flat didn’t know.

Margo found an avian vet in Mountain View, and I took her there. 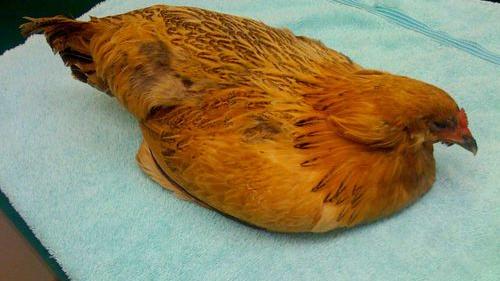 At Miramonte Veterinary Hospital, I filled out forms talking about what our chickens eat, where they live, how old they are, what vaccines they’ve received. Then we saw Dr. Kenton Taylor. Patient and thorough, he examined Alana, put her on the floor and tried to convince her to walk, checked under each wing, felt for an egg (he didn’t feel one either) and then told me what could be wrong with her.

His first guess: Marek’s disease. Even though she was vaccinated against it as a chick, I asked? Maybe. He said it was somewhat unclear how long the vaccine lasts.

Then, it was a panoply of untreatable and terrible possibilities: heavy metal poisoning, botulism, a metabolic disorder that caused an organ to fail.

The best thing to do, then, would be to put her out of her suffering and send her body to the state lab, where it would undergo necropsy. That way, we’d know what went wrong with her and help us learn if we needed to do anything different with the rest of the flock.

There was little doubt in my mind that it was the right thing to do. Which is why I was so surprised that I started to cry. And couldn’t stop.

I’ve done my best to moderate my attachment to these chickens. Indeed, I have often found myself disappointed by the limitations of their personality, and the way they peck at each other, and how I don’t think they know the difference between me and any other person. I’ve worked to not fool myself about how there’s little difference between these chickens and the chickens I eat. But after having Alana sit next to me for much of the week, trying to coax her into eating anything, hoping fervently that she would get better — then, knowing that there was nothing more to do, that she would die — it was a little overwhelming.

The nice folks at the vet’s office, of course, were not at all surprised. They give people the sad news that their pets are beyond help all the time, so they gave me a few more minutes with Alana. Perched up on the table, she could barely keep her eyes open.

I regained my composure and poked my head out the door. The vet tech, whose name I never even learned, wrapped Alana up in a towel and took her to the back of the office. I did not see her again. 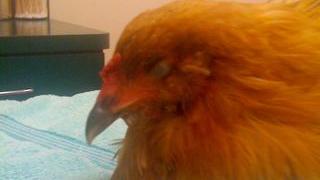