by Elizabeth Jardina, Sunset researcher Nobody loves our chickens as much as our Jim McCann. Sunset art director, leader of Team Chic... 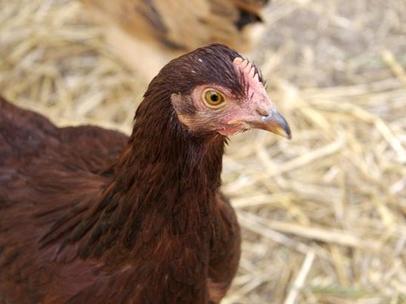 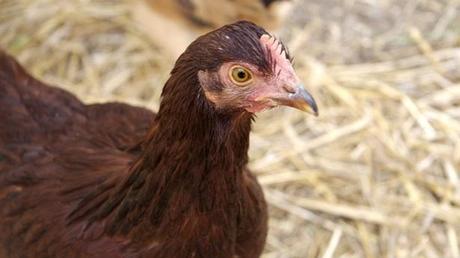 Nobody loves our chickens as much as our Jim McCann. Sunset art director, leader of Team Chicken, he is probably the person who spends the most time in the coop. He brings them an afternoon apple every day, he holds them and pets them, and he is the most vigilant of us about keeping them fed and watered.

And what does Carmelita do in return? Bites him.

Do these chickens have no sense of decency? Jim is so tender-hearted that he issued a proclamation that we shouldn’t lift our chickens up and take their eggs while they’re still in the nesting box, because he’s afraid it will upset them. (Secretly: I’m still taking their eggs from under them; I think that’s a time-honored part of chicken-human interaction.) But still …! He’s the one who was most distressed when we were worried that Carmelita was a rooster. (Which would have likely meant the stew pot.)

Nothing like a little blood-sport to change a man’s opinion. After she gave him a chomp, even Jim was considering Carmelita coq au vin.

We don’t have any photo or video documentation of the event, sadly, but I think it probably went a little like this. (It’s a video.) And despite the potential danger in a chicken bite, Jim seems thus far undiseased. Only his heart is broken.

And it’s not just biting humans. Carmelita seems to be our group’s little Robespierre, leading her own reign of terror. (I know, Julius Caesar to the French Revolution — I’m mixing historical metaphors.) But she’s managed to peck out nearly all of the sideburn and muff feathers on Ophelia and Alana, and she pecks poor Honey so much that her comb is starting to look stunted.

Although we’ve had much wringing of hands about this, it all seems well within the bounds of normal chicken behavior. The pecking order is brutal, man.

We’re trying to calm her behavior using a combination of techniques:

We’ll let you know how it goes.

***
In better chicken news, I have the perfect way to use a half-dozen fresh chicken eggs: a souffle. I’d never made one till this weekend, and let me tell you, it was superb. Easy! Delicious! As satisfying a cooking experience as I’ve ever had. I made this Classic Cheese Souffle using sharp provolone, and I added a crushed clove of garlic and a tablespoon of chopped rosemary to the bechamel.

I didn’t even have a proper souffle pan (I just used a 1.75-quart oven-safe glass casserole) and made a foil collar to prevent overflow. Worked like a charm.

Serve it with bread, a salad, and a glass of Riesling, and you’ve whipped up the perfect Saturday night dinner.