A couple of weeks ago, while up in the gorgeous Okanagan Valley (B.C.), I met a charming beekeeper named Helen Kennedy. Helen ... 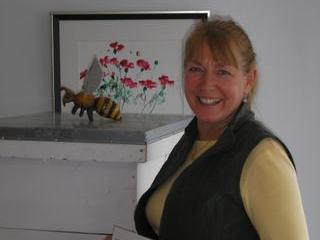 A couple of weeks ago, while up in the gorgeous Okanagan Valley (B.C.), I met a charming beekeeper named Helen Kennedy. 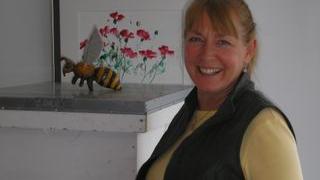 I’d gone to her place, Arlo’s Honey Farm, to taste her award-winning honey and learn a bit about her beekeeping techniques. Well, as it turned out, Helen has been reading our Bee blog. She knew all about our strange multiple swarmings and our epic, unending battles with mites, which fasten perniciously to the bees’ bodies, weakening them. They also kill brood and spread viruses.

Immediately yet gently, she began dispensing bits of advice about both swarming and mite control. We’re passing these gifts along today, Earth Day, for the benefit of any beekeepers reading this–and their bees.

Helen’s Earth Day Gift No. 1: How to control swarming

Bees will swarm for a number of reasons–most often when the hive has produced a rival queen (or queens), who each fly off with a portion of the bees, or when the hive is too crowded. Your chances of averting a swarm increase if you a) remove the rival queens before they’re born and b) give your bees more space.

Which means: destroy the queen cells as soon as they’re formed. “Look for a row of cups (i.e. queen cells) along the bottom of the frame and remove those,” advises Helen.

But sometimes the queen is weakening, and really does need to be replaced with a strong, healthy new queen. How can you tell whether you’re knocking off a crowd of Pied Pipers–or a desirable new leader?

“If the queen cell is in the middle of the frame, leave it alone. That means the bees know they need another queen.” Amazing little creatures, these bees.

The other point about the row-of-cups formation: this is your heads-up that the bees are considering a mass move. It’s valuable information, because then you can remove filled frames and replace them with empty ones, giving the bees room to build and grow–and lessening their urge to emigrate.Helen’s Earth Day Gift No. 2: How to fight mites

Use screened bottom boards, with a removable plastic board to catch and count mites. (We do this already, but Helen gave me a board marked into sixths, to make it easier to count a zillion mites; one square’s count times six will do the trick.) 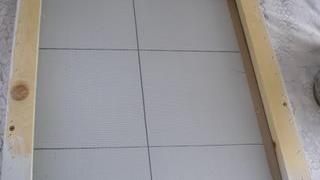 Our new marked-up bottom board, courtesy of Helen.Use formic acid pads. We’ve tried this, with some success. Helen applies hers in fall (after the honey harvest in August and before the frost) and  three times in spring. She likes to apply three times, 5 days apart, “to get it through all the bees and the brood, too.” 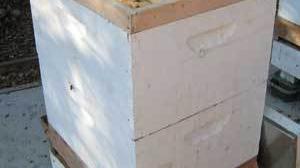 Our hive Veronica, with a formic acid pad sitting on the frames.Put in an “extender patty”, a hamburger-like patty made of  Crisco, icing sugar, and essential oil of wintergreen. The bees eat it, crawl over it, and get thoroughly coated in this slick stuff so that the mites have no toehold.  She’ll be sending her recipe to us; look for it in a post coming soon. 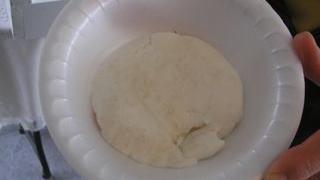 A mite-fighting extender patty. Begone, mites!Plant nasturtiums. She’s not completely sure about this, having not yet tried it herself, but she’s read about a beekeeper in Germany who noticed that whenever his hives were set near nasturtiums, they were mite-free. Sounds like an idea worth trying!

Here’s a last Earth Day gift from Helen’s own earth—her bees and her 14 acres of peach trees:

In a large saucepan over medium-high heat, boil 1 part peach chunks with a little less than 1 part honey (adjust the amount depending on the sweetness of your fruit). Boil until the syrup starts to thicken. (Test by dropping some syrup on a plate and popping it in the freezer until it’s just cool; if it’s as thick as you like, stop; if not thick enough, keep simmering and testing.) Pour into jars and process the way you would any other preserve.