Crisis in the coop!

by Elizabeth Jardina, Sunset researcher Our girl Honey is spending a lot of time in the nesting box. It was getting to the point... 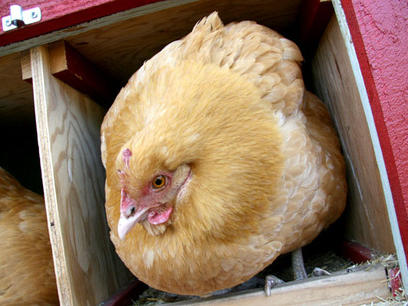 Our girl Honey is spending a lot of time in the nesting box.

It was getting to the point where every time you opened it up, she’d be in there, fluffing her feathers and acting a little pouty. We chalked this up to broodiness, the state when hens get it into their heads that they want to sit on and hatch a clutch of eggs.

And we all thought it was adorable. Our little Honey! She was the last to lay, but here she is, getting motherly. So jolly and cute. 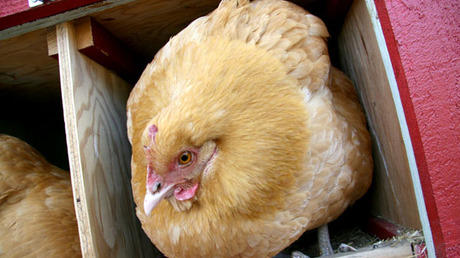 On Saturday, I got annoyed with Honey’s “broodiness” and pulled her out of the box and put her back in the regular coop. (You’re supposed to discourage broodiness in pullets and any other chicken who’s not going to eventually raise chicks.)

Instantly, it became clear to me why she’s spending all her time in the nesting box. Carmelita is terrorizing her. Within seconds of my plopping her down in the coop, Carmelita was pecking Honey’s comb till it bled.

I felt so bad about all this that I spent the next 30 minutes running interference so Honey could get something to eat and drink. (She seemed hungry and thirsty.)

So the question is: What to do? I’ve read about putting hiding places into the coop — a panel of screen door is often recommended. That way, Honey could see what was going on in the coop, but wouldn’t be vulnerable to attack. Of course, I imagine if you live on a farm, you might have part of a screen door lying around. Us? Not so much. 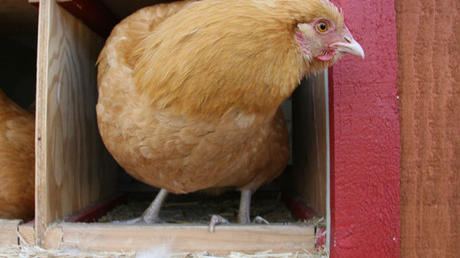 I feel terrible. This has been going on for weeks, and we thought she was just hanging out in the nesting box for fun. But now I feel like she’s a prisoner in her own coop. Honey’s a really sweet chicken; unlike her more cranky sisters, she never bites, and doesn’t mind being held. How could I have been oblivious to her peril?

In other news, I bought some black oil sunflower seeds yesterday. Hopefully adding a handful of these to the girls’ feed every day will keep them from doing so much feather-plucking. (Apparently the sunflower seeds provide an amino acid that you can also get from … feathers.)