Alas, poor Ophelia! Why didst Team Chicken burden thee with the name of a tragic Shakespearean heroine? For thy fate seems gloomy indeed.

Okay, it was all my fault—I LOVE Shakespeare and insisted on the name. So ’twas I who took Ophelia, suddenly afflicted with a potentially deadly impacted crop, off to the Adobe Animal Hospital in Los Altos.

Here she is, in her transport carton: 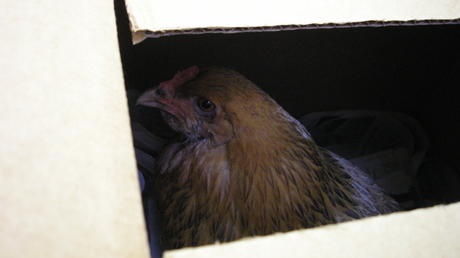 She settled right down and didn’t utter a single sound on the drive to the vet’s. It was actually worrisome,  but sure made the drive easy—I had visions of her bursting out of the box and flapping around the car, banging her poor swollen crop against the windows. Nada. She was an angel.

At Adobe, the receptionist immediately got on the intercom and barked, “Check check on a chicken. Check check. Chicken check check on a chicken.” I felt as though I’d just ordered a sandwich in a drive-through. Then she very sweetly asked, “And what is Ophelia’s last name?”  Last name?! Er—Sunset? (Ophelia Sunset: Hey drag queens—looking for a cool stage name?)

We had a bit of a wait, during which time we observed tragedy and comedy. The cute Airedale with a limp, still chipper enough to play with the kids and mom who brought him. The little orange cat, carried in motionless and wrapped in a towel, whose owner choked on her tears when asked his name. “Hobie,” she whispered. The lizard, off in an unseen operating room; a technician told us that the doctor was just finishing up with him and would see Ophelia next. “He had a prolapsed rectum,” she added. Who knew a lizard could have such a problem?

Dr. Nicolette Zarday, blonde and with an unusually kind and sympathetic face, examined Ophelia. “I’ve never dealt with a chicken before,” she said. “But she seems to have crop stasis [another term for impacted crop], which we see in other birds too.” 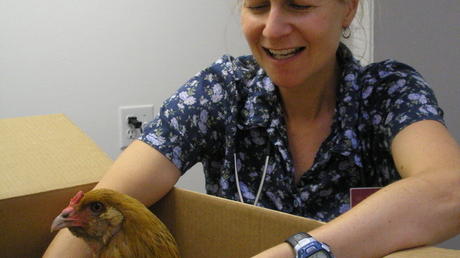 To loosen the mass, Dr. Zarday suggested running a tube down Ophelia’s esophagus to fill her crop with a solution of warm water and mineral oil. “You can watch if you like.” Er, no thanks. 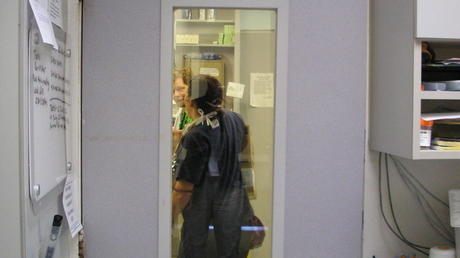 Through this door, Ophelia is being intubated.

I retired to the waiting room and saw Hobie’s owner rush out the front door. “Hobie didn’t make it,” said another technician, when I asked. Poor Hobie! Rest in peace, little kitty.

Things turned out much better for Ophelia, who emerged from her procedure looking exactly the same as she had going in—i.e. totally calm—but with a slightly looser crop. It felt more bean-bag-ish and less like modeling clay. “We hope she’ll regurgitate,” said Dr. Zarday. Well, good thing the box is heavily lined with newspaper.

No regurgitating on the way home, just a silent chicken. But she seemed to perk up when I set her down back in the coop, to welcome squawks from her coop-mates.

Maybe we should change her name to Olivia…

Oh, and in case you’re interested, the fee for chicken intubation is $60, which we calculated would buy at least three decent chicken dinners. Then again, Ophelia has laid delicious eggs faithfully on a near-daily basis since January; we figure she’s paid for her bill. Plus, she is a very sweet chicken.