Buying the King of Chiles at the Santa Fe Farmers’ Market

“Chimayó is to chile as Havana is to cigars. After centuries of selective breeding, and irrigation from a particular mountain stream, there’s an unmistakable complexity to the chiles here, a citrus tang, a depth and richness you can’t find elsewhere.”

I’m standing at the Santa Fe farmers’ market reading this quote from “The Chile That Saved Chimayó” by Henry Shukman. I was silly enough to ask chile grower Noel Trujillo of Vigil’s Chimayó Produce what’s special about Chimayó chiles. “Did you read the sign?” he asks, pointing to the one posted at his booth.

Trujillo and his wife, Gloria, sell red Chimayós, but from blocks away I smelled the distinctive sharp and smoky aroma of other vendors’ green Chimayós roasting in huge drums. Farmers began harvesting them in late August and setting up their big roasters at the market to loosen the chiles’ skins, which fall off into screens. The farmers then package up the chiles in freezer-ready bags, and many people in town stock up for the whole year. 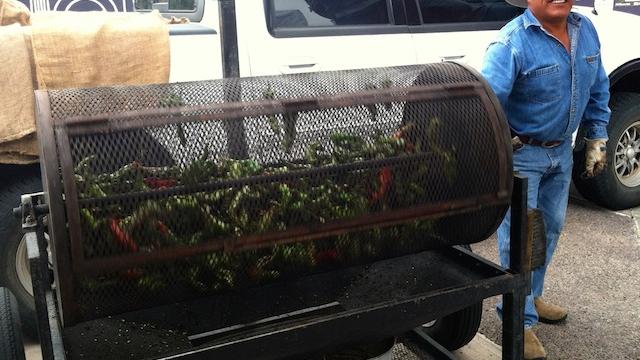 Once the Chimayós are dried, these red chiles don’t need to be peeled, as people grind them into powder or sauce. For most folks, it’s not a choice of red or green. They want both for cooking up green and red enchiladas and many other dishes all year long. Though I see other varieties of chiles at the market, Trujillo explains that a true Chimayó, an intensely flavorful landrace chile grown for centuries in the town of Chimayó north of Santa Fe, has a curling shape and thinner walls that distinguish it from the modern straight-sided, fleshier chiles that are easier to roast and clean. Only 8 or 9 farmers grow genuine Chimayós, he says. For stuffing into my luggage I opt for a small ristra, and Trujillo explains that at home I should set it out in a sunny place until the chiles feel thin, leathery, and no longer squishy. Then separate them and store them unwashed in freezer bags. I can already taste the Carne Adovada. The Santa Fe farmers’ market is open year-round on Saturday mornings and on Tuesday mornings in summer. Though fresh ristras aren’t generally available by mail order, you can buy ground Chimayó chile from Native Hispanic Institute.