A few days ago, the weather was gorgeous, so I decided to cook outside. My plan: to grill up some corn,... 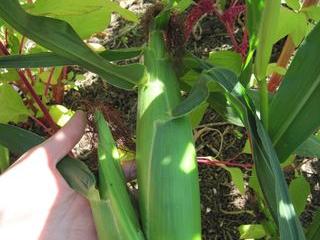 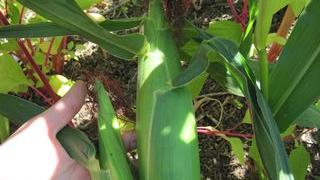 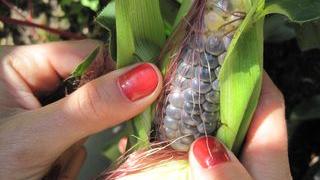 A few days ago, the weather was gorgeous, so I decided to cook outside. My plan: to grill up some corn, brush it with butter, and sprinkle it with parmesan cheese for a little blog post. But that was before I saw “it.”

Johanna Silver (our test garden coordinator) and I went on a little jaunt out to the test garden to pull the corn. The cobs were half the size of standard corn, and when she peeled back the layers I realized that it was BLUE CORN (‘Blue Jade’ from Seed Savers Exchange)!!  How cool is that!  I knew I would NOT be grilling this corn—it was just too pretty.

Instead, I decided to make a raw corn salad. I needed some herbs and chiles, so we went hunting around the garden. We found serranos, which I thought would go nicely with cilantro, but Johanna didn’t have any cilantro. She DID have some Vietnamese coriander (a.k.a. rau ram), so I grabbed that. 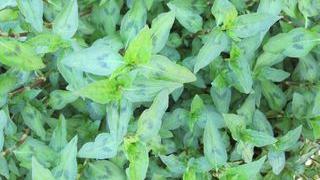 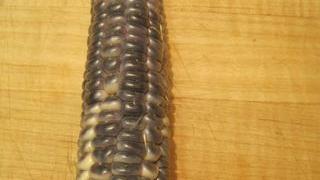 I then shucked the corn, cut it from the cobs, tossed it with a little oil, a squeeze of lime juice, some of the finely chopped serrano, salt and pepper, and some roughly chopped rau ram. Although the corn was delicious and delicate, it was the rau ram that stood out. None of us could pin down its flavor. I thought it was a little soapy, others thought it was very herbaceous. It’s really unlike anything else you’ve tried. Mai Pham wrote about it in her book Pleasures of the Vietnamese Table, describing it as “spicy, sharp.” It’s traditionally used raw in salads, like I did here, or in soups. 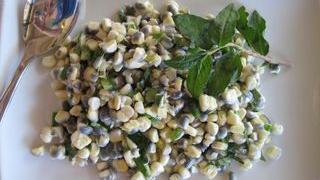 Lesson learned: Sometimes you just need to throw your plans aside and go with what the garden gives you-you’ll be pleased with the results.

Have you grown rau ram?  Or any other Asian herbs?