Birds on a tether

Google the term ‘chicken hawk’ and you’ll find a handful of varying definitions. For instance, chicken hawk can refer to som... 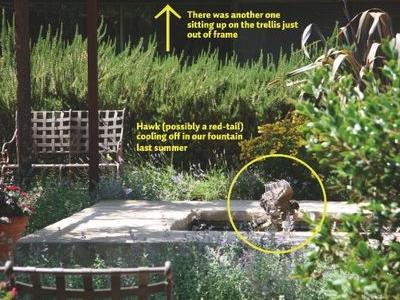 Google the term ‘chicken hawk’ and you’llfind a handful of varying definitions. For instance, chicken hawk can refer tosomeone in the public eye who fervently supports war but actively avoidedservice. It can be used to describe a person who spends an inordinate amount oftime trying to get stuff for free. Or, when someone who decides for whateverreason to get a Mohawk-style haircut but then at the last minute opts to leavean inch or so of hair where it should be shaved, not fully committing to thelook. They’re now sporting a chicken hawk.

When I hear theterm chicken hawk, I think of this guy:

We’re gettingprogressive in the business of raising chickens here at Sunset. For almost twoyears, our hens have been cooped up. Literally. Unaware of the considerablepleasures that lay just beyond their reach in our test garden. Impounded.Scratching in an area so small I couldn’t park my car in it.

But recently, MargoTrue, Sunset’s Food Editor and shepherd of our One-Block Diet franchise, rushedinto my office and proclaimed, “Release the chickens! We must put them out toscratch to their hearts content in our garden! Free to feel the sun and able todine on bugs and slugs. Free to release their bowels into our soil andfertilize the earth so that our crops are nourished and thrive!” (I may haveparaphrased a bit)

Sounded good to me.

So test gardenguru, Johanna Silver set up this:

When Johannareturns from vacation, I’ll have to remind her of the hawks.

It happened latelast spring. I was out tending to the flock when off in the distance a predatorbird let out a loud screech. The reaction from our chickens was nothing shortof amazing. All six birds stopped what they were doing and froze. Completely.Like a gaggle of feathery statues, they cast a vacant stare up at thecorrugated plastic above our heads. For like 20 seconds. Amazing because it wasbasic instinct in its finest form.

We got a glimpse ofthese magnificent birds this past summer when temperatures here in Menlo Parkreached a scorching 104˚. A family of hawks (we couldn’t identify but we thinkthey were red-tailed) visited the fountain in our center courtyard. 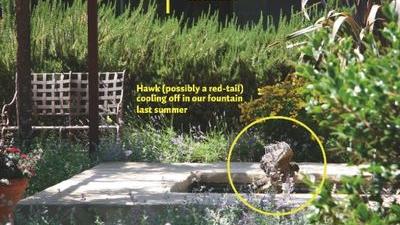 They had no doubtcome to drink and bathe. The question was, at least in my mind, were theylooking to feed?

And to say ourchickens are skittish is nothing short of an understatement.

On ElizabethJardina’s (Fact-checker, chicken blogger) last day at Sunset, she wanted tospend time with them outside the coop (pre- Johanna’s contraption) and enjoythem in our garden free from wood and wire. Standing there it was hard toignore the similarities. The birds, scratching new terrain, grabbinglow-hanging fruit from tomato plants. And EJ, with a ticket to Prague in her backpocket and plans to return to school in pursuit of a master’s degree. It was apoignant moment. A moment shattered by a tiny black finch.

From the corner ofmy eye, I saw the finch dart overhead and out of sight. But that tenth of asecond was enough to send poor Ophelia over the edge. She took flight, like abat out of hell, from where she blissfully dined on cherry tomatoes, over ourcompost piles and into the secure confinement of the coop. Her reaction was soovertly prudent it sent the others into an unprecedented panic. 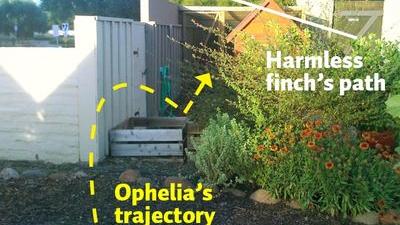 So after seeingJohanna’s chicken run, I posed the question to Team Chicken: What about thehawks?

From the hawk’sperspective, our chickens enjoying the limited freedom of our garden within anoval-shaped fence may look like this: 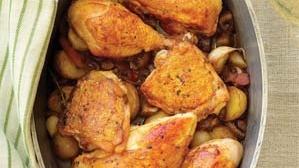 Margo’s solution for now is to chicken sitwhile they are set out. Besides, there’s no going back. Now that they’ve had ataste of freedom, they scurry back and forth at the front of the coop when weapproach it, like an inmate dragging a tin cup across his prison bars. And Rubydoesn’t shut up. I’ve heard that once you show chickens there’s life outsidethe coop, they always want out. I’m tentative but willing, and hopeful that aswe approach Halloween, we’re not creating our own little monsters.