At Last, My Finnish Cheese Mold Finds a Use

Several years ago, I spent some time in Finland, writing a story about a Finnish family and their summer food traditions. They had a cozy... 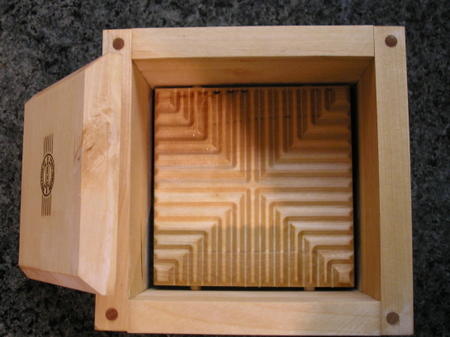 Several years ago, I spent some time in Finland, writing a story about a Finnish family and their summer food traditions. They had a cozy pine-scented house on an island in the Southern Finnish archipelago. A freestanding sauna lay a few hundred feet away, and below it, a small dock from which you could plunge your sauna-steamed body into the frigid Baltic Sea. They went mushroom- and berry-picking regularly and had giant crawfish feasts whenever they could.

They also made their own fresh cheese. To them it was as routine as blending a smoothie might be for us. Pia, the mother of the family, whipped it up one night in 20 minutes, and it was the first time I thought of cheese as something the average person could actually do.

She also had a handy square mold into which she packed the cheese, with a decoratively ridged bottom (to imprint the top of the cheese) and a channel on the inside edge for draining the curds. As soon as I got back to Helsinki, I bought one. 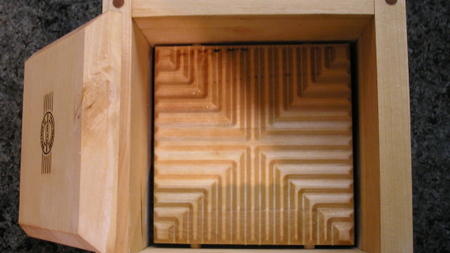 My Finnish cheese mold.Once home, I put it in my Culinary Curiosities closet (i.e. the closet in the spare bedroom) where it mingled with a curvy Turkish glass teacup, my Indian bread-rolling board, and some panettone liners from Italy. I planned to use it someday, really.

Three days ago, it rose in my memory as I was thinking about making a batch of the Fresh Chive Cheese from our One-Block Diet summer feast. Instead of rolling the cheese into a log, I’d put it in my Finnish cheese mold.

As long as I was at it, I changed the recipe a little, too. This time around, I mixed in chervil and tarragon along with the chives, and lots of lemon zest as well as the lemon juice used for curdling. And some red chile flakes.

I skipped the kneading step and put the seasoned curds right in the cheese-cloth–lined box, covered it with its lid, and put 4 pounds of weight on top. The whole thing went in a big metal bowl to catch drips, and then into the fridge. 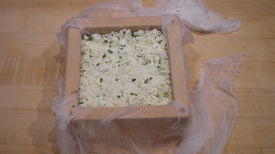 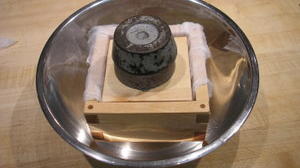 Curds in the box, left. Right, two weights (totalling 4 lbs.) compact the curds into sliceable cheese.A few hours later and with a drizzle of olive oil on top, it was ready: Fresh lemon herb cheese. 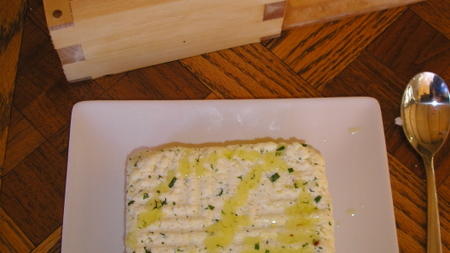