Up close and personal with Africanized Honey Bees

I’m no stranger to Africanized honeybees.A few years ago my dad was attacked in Tucson while watering the plants in our backyard. Even a... 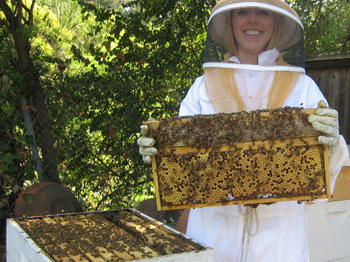 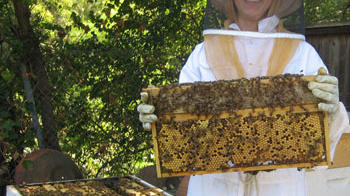 I’m no stranger to Africanized honeybees.A few years ago my dad was attacked inTucson while watering the plants in our backyard. Even after he frantically raninside, more than thirty bees followed him, and my entire family had to swat fornearly ten minutes to get rid of them. He was stung more than thirty times.

The year before an inspector told us they were Africanized bees, but we’d never had a problem until that day.

Most people know Africanized bees as killer bees, a term UCDavis entomologist Eric Mussen says is misleading. “They were called assassin bees in Brazil because the bees go into European honeybee colonies and wipe out the other bees, not because they kill humans.” They do pose a more seriousthreat than European bees though. While you might receive up to 200 stings froma honeybee attack you could receive up to 2,000 from Africanized honeybees,something virtually no one can withstand. Genetically, AHB are more aggressivein guarding the hive—they’ll follow you for up to 30 minutes and thus you’remore likely to be stung.

In the past ten years, AHB have gradually been moving north;so far they’ve been located as far north as central Nevada. But Mussen saysthat trend is slowing and that no new migration has been recorded in recentmonths. “It appears as though the Northwest expansion has slowed down to atrickle, if not stopped,” Mussen said. “We were predicting they’d be in the BayArea by now, but for some reason they didn’t make it.” There’s enough pollenand NorCal has the right climate, so entomologists don’t really know why thebees aren’t migrating.

The good news is, beekeepers have learned how to mitigateaggressive AHB colonies by introducing European honeybee queens, which thencross-breed and produce gentler offspring. If only I’d had beekeeping skillsback then and could have re-queened the hive outside our house. Ok, you’reright, I probably wouldn’t have had the gusto to suit up and try to reengineeran entire hive. That’s something I’d happily leave up to a professional!

In the end, my dad was fine and never had to go to the hospital. But he’s jumpy around bees now and even the sound of a fly makes the hairs on his arms stand up. It’s too bad he never got the chance to meet Sunset’s bees. Even though they have their feisty moments, they’ve completely won me over.