In among the usual wintry produce, like cabbage, in the Sunset garden, we have a little citrus bonanza going on. In addition to oranges, ... 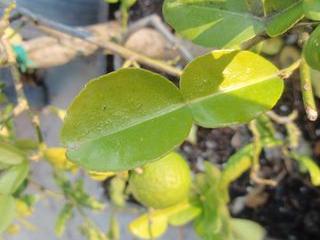 In among the usual wintry produce, like cabbage, in the Sunset garden, we have a little citrus bonanza going on. In addition to oranges, grapefruit, and Meyer lemons, there’s a kaffir lime tree. If you don’t know kaffir lime (also known as ‘Kieffer‘ and makrut lime), it’s a super-aromatic citrus similar to lime but with a wild, pine-like, almost resinous edge. You’ve probably tried the leaves in Thai cooking. It turns out kaffir lime zest is amazing in cookies. 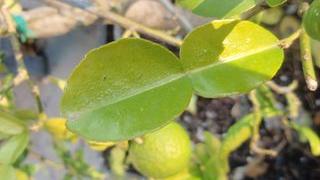 Typical two-lobed kaffir lime leaves, with the lime itself beneathBen Spungin, pastry chef at Marinus Restaurant at Bernardus Lodge in Carmel Valley, California, shared the recipe for these crisp butter cookies with me. He flavors them with kaffir lime zest (so aromatic that everyone who walked through the test kitchen while I was baking said “wow! citrus!”) plus anise seeds. The seeds give them a delicate crunch and underscore that pine-like flavor. 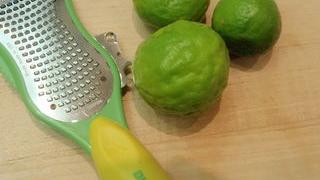 Bumpy-skinned kaffir limes, ready to be zestedSometimes Ben gets his kaffir limes from the chef and culinary director at Bernardus, Cal Stamenov, who grows citrus as a hobby. Here’s a story about Cal and some of his exotic citrus recipes.

If you don’t have access to kaffir limes, you can give the recipe a try with regular limes. Not as exotic, but still a treat.

2 tbsp. kaffir lime juice (add a little water if you don’t have quite enough juice)

1. Make cookies: Beat butter, granulated sugar, and vanilla in the bowl of a mixer until very smooth. Add egg, anise, and kaffir lime zest and beat until incorporated. Blend in salt and baking powder, then gradually blend in flour on low speed until smooth.

2. Divide dough in half, shape each into a disk, wrap airtight, and freeze until firm enough to roll, about 30 minutes. Meanwhile, line baking sheets with parchment paper and preheat oven to 300°.

3. Roll each dough disk on a work surface between 2 sheets of parchment paper until 1/8 in. thick. As you work, flip the parchment packet over every so often and reposition the paper if needed to eliminate any wrinkles. Cut dough with floured 3-in. cookie cutters, slide a small metal spatula underneath each cutout, and transfer to the lined baking sheets. If dough gets too soft to cut neatly, return it briefly to the freezer. Re-roll scraps as needed.

4. Bake until cookies are golden, about 20 minutes, switching pan positions halfway through baking. Transfer cookies to racks and let cool. 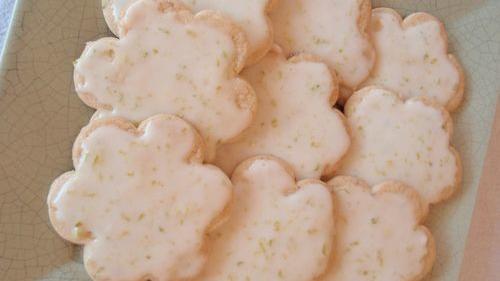