A beekeeper visit and a mite trap

It helps, when you're new to beekeeping, to have someone more experienced guide you through your hive. That's Tom in the photo below, on ... 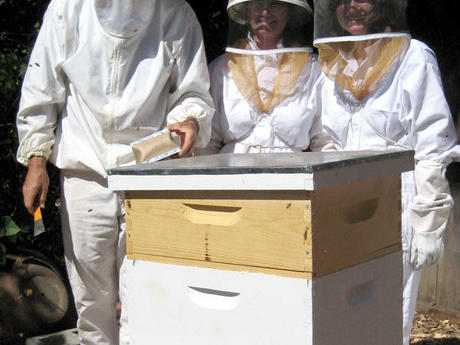 It helps, when you’re new to beekeeping, to have someone more experienced guide you through your hive. That’s Tom in the photo below, on the left. I’m in the middle, and Molly Berman on the right. 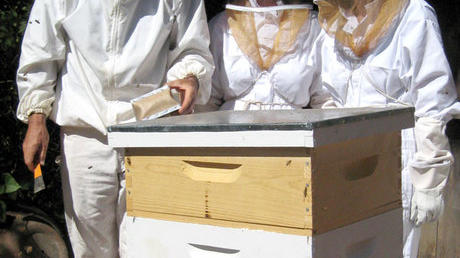 Last week, Tom Vercoutere, President of the Beekeepers Guild Of San Mateo County visited our hives, and we were relieved to hear that he thinks they are doing well. Hive Veronica has filled out both boxes with brood and honey. In fact, she may be honeybound—the bees have filled the box with so much honey that she doesn’t have room for more egg laying. It’s a recipe for swarming (when the bees and queen pick up and leave), so Tom helped us switch some frames around and gave us some tips to relieve the congestion.

We also pulled the drone frame that we are using as a mite trap. Varroa mites prefer drone brood ten to one, and by putting in a frame that’s been designed to encourage the bees to build drone cells, we can raise nothing but drones (and mites) in that frame. Just before the drones begin to emerge, we take out the frame and kill them by freezing or throwing away the comb.

We did just that when Tom pulled that frame. We found the drones in our drone frame were emerging like crazy, so we were just in time. We pulled the frame, shook all the bees from it and put it aside. Later, we cut out the comb and, after warning the food department that we were freezing bees, froze it to kill the mites and the drones.

If you click on the photo at left to make it larger, you’ll be able to see the drones emerging from their big bullet-shaped cells.