As November creeps on at a petty pace, skiers and snowboarders across the West are sharpening their edges, scouring snow reports, and looking longingly toward the soon-to-be-snow-covered peaks. In the spirit of the season, we sat down with Mammoth Mountain’s mascot, Woolly, and Winter Park’s mascot, Willie, for a long winter’s chat. 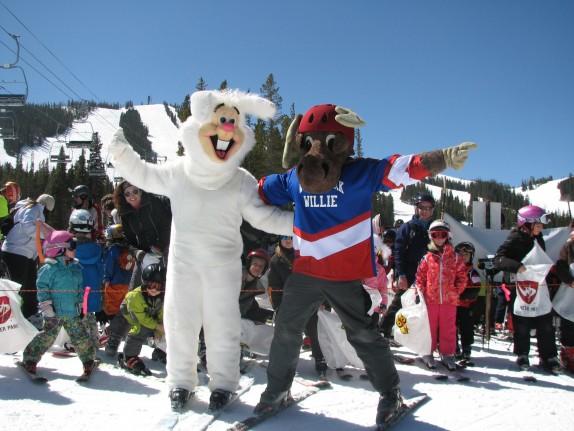 Winter Park Willie shows his stuff with his close confidante, the Easter Bunny.
Written by mcmccrea September 26, 2017
Share this story

As November creeps on at a petty pace, skiers and snowboarders across the West are sharpening their edges, scouring snow reports, and looking longingly toward the soon-to-be-snow-covered peaks. In the spirit of the season, we sat down with Mammoth Mountain’s mascot, Woolly, and Winter Park’s mascot, Willie, for a long winter’s chat.

Woolly was born in Mammoth, California millions of years ago. (He’s ancient!) This shaggy, lovable fellow has been roaming the Mammoth Lakes area since he was born. Sprightly Winter Park Willie, on the other hand, appeared on the scene in 1994. One snowy morning, while making their daily rounds, the Winter Park Ski Patrol noticed a wobbly, knock-kneed moose calf wandering Discovery Park. The moose saw the slopes full of little kids learning to ski and ride, and he developed an instant affinity for the sport. A native Coloradoan, Willie has lived his entire life in Grand County.

Sunset: First of all, when and where can skiers find Willie and Woolly on the mountain?

Woolly: Woolly enjoys skiing and snowboarding with friends around the mountain. You can catch him every Saturday afternoon at 2:15 p.m. at the top of Schoolyard Express and at 2:30 p.m. at the top of Discovery Chair. He can also be spotted walking around the lodges and saying “hi” to his friends at Ski School. And of course, every Saturday in the Village, Woolly leads a parade! Bring your dancing shoes! 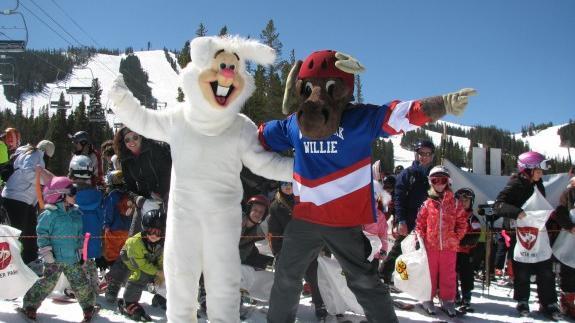 Winter Park Willie shows his stuff with his close confidante, the Easter Bunny.

Willie: Willie can be found skiing and snowboarding throughout Winter Park Resort, but he mainly likes to hang out at the Ski + Ride School, getting everybody psyched up for another awesome day on the mountain.  Every Saturday from 4-5 PM, Willie hosts a party at the Ski + Ride School’s Private Lesson Center, where he hands out snacks, takes photos, and doles out a moose-load of hugs and high-fives.  On holidays, Willie has been known to bring in his good friends Santa and the Easter Bunny to spread cheer across the mountain. Willie’s loves Sorensen Park and Discovery Park, and he’s been known to shred parts of Railyard Terrain Park pretty hard.

Sunset: Is there any special etiquette that skiers and snowboarders should know when they meet Willie and Woolly? Do they prefer hugs or handshakes?

Willie: Willie’s pretty irresistible and, like most moose, he loves to give out hugs.  He’ll even let you tug on his antlers if you ask him nicely! (Please don’t try this with moose in the wild)

Sunset: I heard that Willie can play an instrument. What instrument does he play?

Willie: Willie is a superb percussionist, who has been known to play the drums, the tambourine, the triangle, and even the cow—I mean “moose-bell.”

Sunset: Do Willie and Woolly have other hidden talents that the average skier would never suspect?

Woolly: Woolly has LOTS of talents! He’s an incredible dancer, and he can hit the jumps, rails, and half-pipe like a pro! Woolly is also an excellent mountain bike rider. 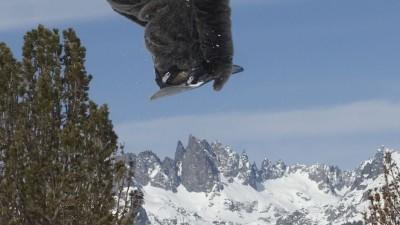 Woolly gets big air, in preparation for his showdown with Willie.

Willie: Like Woolly, Willie is an expert skier and rider.  He loves hitting big air and shredding up the terrain park.  Hmmm, maybe Willie and Woolly should race!

Sunset: I understand that Woolly celebrates his birthday with a giant, resort-wide bash. Does he have any favorite birthday memories that he would like to share?

Woolly: Woolly’s just a kid at heart, and he loves to see the other kids out on the slope having a good time on his mountain. His favorite birthday memory is having the kids help him blow out the candles on his giant birthday cake!

Sunset: How old is Woolly?

Woolly: How old is Woolly? Age is just a number, but Woolly is ancient.

Sunset: If you could have a ski date with any person or creature, living or dead, who would you ski with and where would you ski?

Woolly: Well, the Mammoth Mountain Ski Area founder Dave McCoy, of course. He’s just as much a legend as Woolly!

Willie: This girl moose came traipsing through our Village in March this year, but she was gone before Willie could get her number! Actually, Willie just loves being around people skiing and riding Winter Park, so any good company is the perfect ski date!