Where did the local dairies go?

A visit with John Santana III of Peninsula Creamery Dairy Store & Grill Earlier in the year, we scoured the San Francisco Peninsula ... 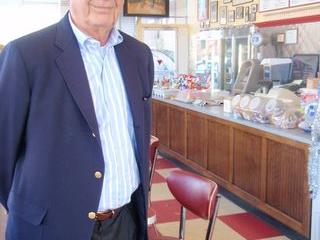 Earlier in the year, we scoured the San Francisco Peninsula looking for a local dairy that would let us do a cow share. We finally lucked out and actually bought a cow at Claravale Farm, southeast of Hollister, but as for the local part, they’re a good two hours-plus from us. I had heard there used to be dairies right near Sunset, and wondered where they went. 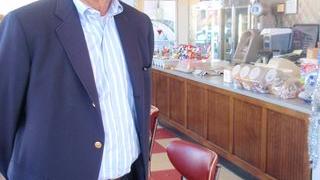 John Santana IIIThe Peninsula Creamery was founded in 1923 by his dad, John Santana II, and J.B. Howell. John Santana III grew up in the business and remembers the time when every county in California had its own small dairies and dairy products.

Black-and-white photos inside the restaurant bring back the Peninsula Creamery’s heyday, when they owned their own herds, a milk bottling plant, a fleet of 60 home-delivery trucks, an ice cream-making facility, a soda fountain restaurant, and the dairy store—all in Palo Alto. 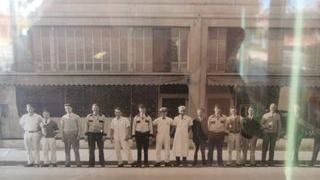 The Peninsula Creamery staff circa 1928“Our Guernsey cows grazed at Troutmere, a ranch that ran from the Stanford [University] barn to El Camino, where Stanford Shopping Center is today,” Santana remembers. “We kept the yearlings off of Alpine Road [now a multi-lane road]. When I was young, I remember driving the herd from there to Stanford land; of course, it was no problem to close down the whole street. It was a nice, peaceful community.” 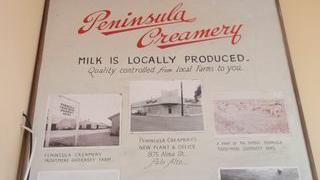 A poster showing the creamery’s historical facilities in Palo AltoSanders rolls off the names of local dairies from those days: Piers, Altamont, Golden State (later Foremost, in Menlo Park, near Sunset’s offices), and others. He remembers a raw milk dairy, too, located in San Jose and run by a guy named Clarence Claravale.

“Claravale would come up here with his excess milk for ice cream, even if it was just three cans. He couldn’t bear to waste it.”

Then, things began to change.

It’s hard to say which took a bigger toll on the local dairies—people and housing, or a change in milk processing laws.

“Back in the ‘30s, to sell milk in a county, you had to process it there,” Santana explains. Then the big grocery store chains managed to overturn that law around 1950. “That was the beginning of the end of the creamery companies.”

Eventually, Peninsula Creamery moved their herds to the Central Valley, sold them, and in 1985, closed down the milk bottling plant in Palo Alto.

The ice cream part of the business continued until 1994. “That was the best ice cream,” Santana remembers fondly. “Great ingredients. We got Gimbels’ peppermints from San Francisco and Marshall strawberries (frozen) from Washington state.” But when the city of Palo Alto told Peninsula Creamery they’d have to replace their ammonia freezing technology with freon (to the tune of a couple million dollars), they closed the ice cream plant too.

“All we have left of the dairy business is property,” Santana says—several ranches, some in-town properties including the Palo Alto Creamery (site of the Peninsula Creamery’s soda fountain, which they lease), and the Dairy Store, a ’50s-style breakfast-lunch grill run by Santana’s son, James, and serving 12 flavors of ice cream (made in Sacramento).

“That’s progress,” Santana says with a wry smile. “Palo Alto was a wonderful place to grow up. It’s still a wonderful town.” 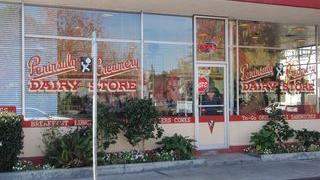