What’s that smell? Our red wine’s a stinker (but apparently that’s a good thing)

By Erika Ehmsen, Sunset copy chief We've been confident about our Chardonnay--both with and without oak chips--for a while now, and we'd b... 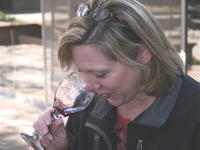 We’ve been confident about our Chardonnay–both with and without oak chips–for a while now, and we’d been starting to joke about how fun and easy winemaking is (I can’t say that I enjoyed high school bio and chemistry nearly this much). But if we’d had daydreams of entering and sweeping a home winemaker competition, our recent Syrah tasting knocked us down a few pegs.

As wine editor Sara Schneider mentioned in her Valentine’s Day post, there was stunned silence from Team Wine when we sampled our first carboy of free-run Syrah. Finally, food editor Margo True offered, “It’s like it’s cinched with a belt.”

Okay, so that carboy’s Syrah was a little uptight, but the nose on the next one got us really worried, as did recipe editor Amy Machnak’s comment after her first sip: “It’s not awful, and it could have been.”

And it just got worse from there, with our third carboy producing descriptions that seemed more akin to Chinese fast-food condiments: “sweet and sour” and “mustard.” Eek!

We bought our Chardonnay as professionally pressed juice, but Team Wine picked and crushed the Syrah ourselves, a few of us even venturing into a (clean) trash can to stomp a few bushels of grapes. So I had to wonder, with tasty Chard and stinky Syrah, were my feet to blame?

It was clear that we needed professional help, and possibly some clinical analysis to diagnose whether our Syrah was “stuck” somewhere in its malolactic fermentation (MLF). Thankfully, Thomas Fogarty winemaker Michael Martella answered my plea for help. As you might recall, back in October he sold us his Chardonnay juice and let us into his vineyard to pick Syrah grapes. He’s raised these grapes since they were just baby vines, and he knows their personalities, from when they’re feisty young wines to when they grow up and can be trusted to drink. Who better to give us advice? (We just hoped he wouldn’t be appalled at how his grapes were turning out in our hands.)

Zipping down from the hills in his vintage Fiat convertible, Michael arrived at Sunset HQ on a sunny but cool Saturday morning. We ushered him into our courtyard and showed the way to our dusty carboys, sitting in a shaded corner. We’d told Michael our theory about MLF being stuck, and he took note of the cool outdoor temperature: “Well, the ideal temperature for malolactic is 63°. It wants to be 60° to 65°. Any lower than that, and malolactic doesn’t like it” and pretty much stops. We could have grabbed our thermometer to confirm our carboys’ undoubtedly cool temperatures, but we had Michael’s trained palate on hand, and the man was here for “a sip and spit.”

He laughed as Sara pulled out our trusty turkey baster “wine thief,” then related that Dr. Fogarty, a cardiologist as well as the founder of Fogarty Winery, “used to use a syringe, so this is better.”

We started with the unoaked Chardonnay, and here’s what Michael had to say:
“Hey, this is pretty good. Big acid, pretty creamy too–could be done.” Then, after a second sip, “I’m pleased with that.” (I think all of Team Wine silently cheered, Hooray!) “Malolactic often gives wine a little oily feeling, and this is a bit oily,” he said, then suggested that we stir up our wine to clean things up. “Have you added any SO2?” (Sulfur dioxide is widely used to protect wine from bad bacteria and oxidation, but we haven’t felt the need for it yet, plus it would stop MLF if it’s not already done.) “I don’t use any either. You can get by with less by leaving the lees [spent yeast] in there. You know what, this could be ready to bottle!” (This time, we did cheer out loud!)

On to one of our “oaked” Chardonnays–Michael, like most pro winemakers, oaks in a barrel, but we couldn’t get our hands on one (they were a bit spendy for our little winemaking project), so our oaked Chardonnays just have a few handfuls of oak chips floating in them, likely not touching the wine in the bottom half of the carboys. Another good reason to stir our wines.

In Michael’s words: “This doesn’t seem as far along in malolactic.” (Meaning the malic acid was still tingling our tongues and hadn’t yet been converted into more mellow lactic acid–think of a lemon drop vs. a vanilla milkshake.) “I can’t really detect the oak. And it’s not as fat as the other one, so the malolactic isn’t as far along. Its nose is more closed. And there’s a tiny bit of stink on the nose, but that could be the toasty-burnt character of the oak chips.” As a remedy, he again suggested stirring things up a bit: “Right now, I’m going through and stirring my Chardonnays two times a week.”

Our Chardonnays have the same birthday, so we clearly need to get stirring soon. But how? Michael’s first suggestion was a magnetic stirrer, but that kind of scientific equipment seems like a big (and somewhat clinical) investment. Switching into a home winemaker mindset, Michael suggested giving our wine the red carpet treatment: “Put a big strip of carpet on the floor, put a cork–a good, sturdy cork–in the carboy, duct tape it down, and start rolling it.” (Ah, the fun of winemaking.)

With the Chardonnay tasted and passing inspection, it was time to move on to the Syrah. (Gulp.) We tried the free-run first, sampling from carboy 2–the smelly one. Michael concurred on the smell, and our hearts sunk.

But then a bit of unexpected news: “Stink is just a varietal character. And a young Syrah’s character tends to have a lot of stink.” (From P-U to Phew!) “Malolactic could be still in effect, but it smells pretty normal. Nice extraction. It tastes better than I thought it was going to taste.” (Hey, is there an echo in here?)

Moving back to carboy 1 of the free-run Syrah, we were a little worried about Michael’s take on its nose: “It seems a little gassy.” And then the first sip: “It’s a little spritzy.” As we discussed “micro-oxidation” to open the wine up, Michael practiced a little micro-oxidation of his own, rapidly swirling his glass of Syrah as he advised that we “let the wine splash when racking” it into bottles to introduce oxygen. And by the time he was done swirling and sipped again, we got more good news: “It’s excellent now. It’s alive, and it’s a young wine, but it’s going to be excellent.” 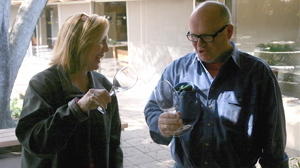 At this point, Team Wine was positively giddy–we could handle carboy rolling and introducing some oxygen to keep things on track.

But then we discovered one potential problem child: Unless we donate carboy 3 of free-run Syrah to Team Vinegar‘s “mother,” we’re going to have to clean up its “funkyness,” as Michael termed it, politely saying, “I would be inclined to blend.”

We might have halted primary fermentation too early, unleashing MLF before the yeasty-beasties gobbled up the sugar and got it down to 0° Brix.

Could Michael diagnose this by taste alone? He was pretty sure there was a bit of residual sugar left, but “I always do chemical analysis. Especially with malolactic. It’s so hard to tell (when it’s done), especially when it gets down low.”

On the sugar front, Michael suggested a real home test: “What you should do is go to a pharmacy and get a blood-sugar diabetes kit: 0.1% is what you’re looking for, but 0.2% is pretty good.” But before we could fully digest this option, and because a drug store wouldn’t have an over-the-counter test for malolactic, Michael offered to take samples back to Fogarty Winery’s lab.

So we loaded him up with zip-locked plastic bags of wine (hey, we’re home winemakers), which Michael safely stowed in his Fiat before zooming back into the hills. Any day now, we should get his scientific ruling and officially know which course to take.

Photographs by Ron Ehmsen (thanks, Dad!) 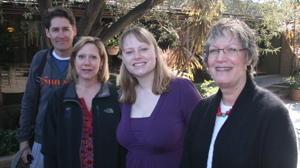