We're harvesting from the garden practically every day now. Cucumbers, corn, tomatoes, edamame, and a small army of pattypan squash—the...

We’re harvesting from the garden practically every day now. Cucumbers, corn, tomatoes, edamame, and a small army of pattypan squash—they’re all on the table. There is the occasional letdown. But so much else makes up for it! For instance, these cucumbers. 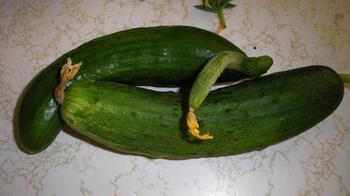 I picked little ones—about 4 inches long—from our ‘Diva’ vines, which test garden coordinator Johanna Silver has cleverly trained to grow up a trellis so they don’t flop all over the place.

Young vegetables are another perk of gardening yourself. You can buy little vegetables, of course, but they rapidly lose their vitality once picked—even faster than mature vegetables do, I’ve found. Eat the little ones a few hours off the vine and you’ll have a reward for all your faithful watering and weeding.

These little divas were probably the best cucumbers I’ve had. They were extremely crisp and sweet, with not a trace of that typical cucumbery bitterness. I didn’t really do anything to them. I just sliced them and put them on a platter with a few of our juicy Early Girl tomatoes and some slivered basil, coarse salt and fresh pepper, and plenty of our own extra-virgin olive oil. 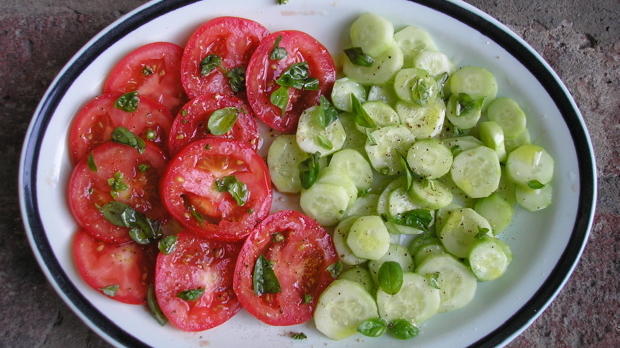 You often hear vintners proclaiming that their wines are made in the vineyard.

This salad was made in the garden.