We Pasteurize Our Vinegar at Last

We've been feeding our vinegar for months now, however haphazardly, and bottling some of it straight out of the crocks for use in cooking... 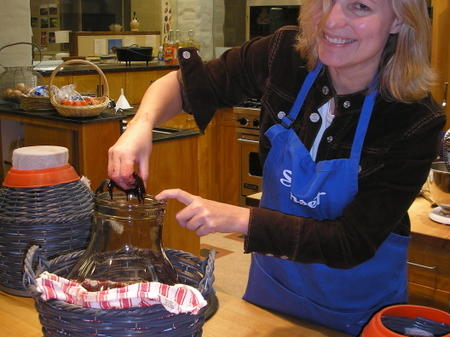 We’ve been feeding our vinegar for months now, however haphazardly, and bottling some of it straight out of the crocks for use in cooking (and of course for our first one-block feast, in August). A couple of days ago, Team Vinegar decided we ought to give pasteurizing a whirl. That way, we figured, we could age it and see whether that might soften the vinegar’s delicious but powerful bite. (Most people, when sipping a tiny droplet of the stuff, start coughing.)

First step: Removing the many layers of mothers from the surface of each crock. (This is neater than just pouring the crock’s contents into a cheesecloth-lined colander over a pot; the mothers slither out messily and fling dark red vinegar everywhere.)

Me hauling the mothers out with (well-washed) hands. 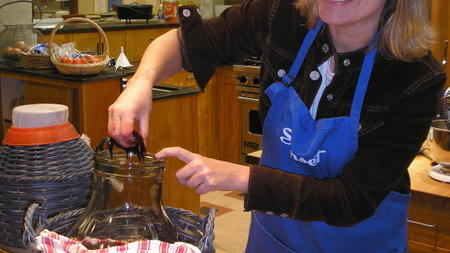 Then we let the mothers drain for a while in a colander, like so many slabs of juicy bologna. (We saved a couple of the thickest, healthiest ones to restart a fresh batch. Click here for a refresher on how to begin from scratch, with a mother, a bit of wine, and some water.) The rest of the vinegar, along with stray bits of mother, we poured into heavy pots to pasteurize.

Draining the mothers, above. Below, garden associateeditor Julie Chai (foreground) and garden editor KathyBrenzel strain vinegar into the pasteurizing pot.

Using an inexpensive candy thermometer to measure the heat, we took the vinegar up to 155° F, as recommended by Paula Wolfert, our vinegar consultant, and did our best to hold it there for 30 minutes. It took forever (okay, about 20 minutes) for the vinegar to heat up properly, and then it was all we could do to restrain it from rocketing up into full boil. We dashed madly from the electric stove (at left) to a gas one (below) for better heat control.

Meanwhile, we had a canning pot full of sterilized bottles at the ready (you can also try sterilizing them in a large, deep turkey roasting pan, as long as the water covers them by an inch when they’re lying on their sides). A jar lifter (below) is the greatest thing ever invented for lifting hot, slippery glass. Don’t even try this with tongs.

The rest was simple: Funnel the vinegar into the hot bottles and pop in a cork (leaving some headspace). 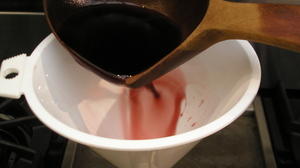 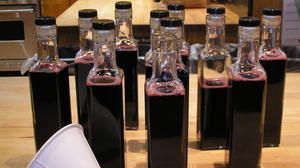 These bottles represents only a tiny portion of what we made. The rest is quietly aging. We’re trying two different materials: clay (Paula’s favorite, for the gentle way it breathes) and our open-topped French oak cask, which, if it lives up to its reputation, will impart lovely mellow flavor. We’ll check on both in a few weeks to see how they’re tasting. In the meantime, we’ll have plenty of tang in our holidays.