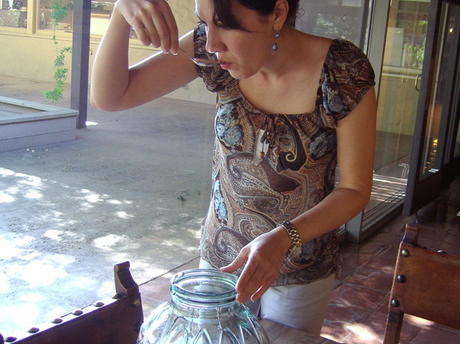 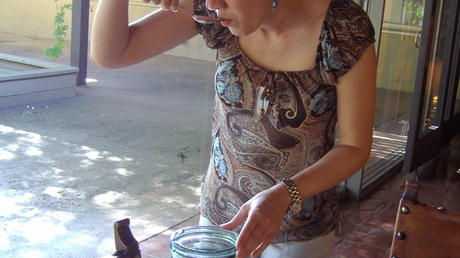 In our last post, we on Team Vinegar confessed to neglecting our project, to underfeeding the vinegar bacteria with fresh wine. We were pretty sure that two of our “mothers” had died from outright starvation.

Well, I’m happy to report that we tasted our vinegars a few days ago, and the jars with the seemingly expired mothers (the 1-gallon mason jars) actually yielded delicious vinegar. Very tart, strong, fruity, full of character. It was so much better than red-wine vinegar you buy at the store—just as our consultant, Paula Wolfert, had promised. And there actually were mothers in those jars—the barest shimmer on the surface.

Interestingly, the two wider (3-gallon) jars, which produced much thicker, visible mothers, made a vinegar that tasted good, but not as wildly fruity and tart as the Disappearing Mother jars. We pondered this, and realized that a) acetobacteria and their mothers (their cellulose “homes”), grow best with lots of oxygen, which of course the wider jar provides; and b) we should have fed the wider jars more often. The muted flavor is probably a result of overconsumption by bacteria.

We ended that day happy. Vinegar is one tough foodstuff, the rubber tree of the food world.

P.S.: We inadvertently broke one of the larger jars, so we threw out the contents, pouring them into a colander first to catch any chunks of glass from going down our garbage disposal. At the bottom of the jar were layers of spent mothers. They looked sort of like bologna. Or…well, you decide: 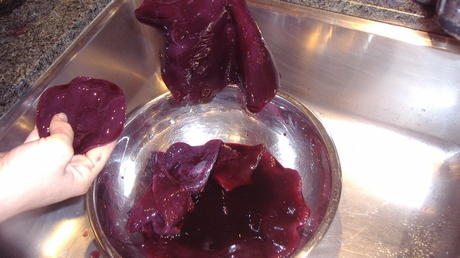 They’re actually not bad to handle—just a little bit rubbery. Kind of like fruit rollups.