Readers of this blog know that the Sunset hives battle the dreaded varroa mite. Sometimes I think that across the back of every Sunset bee... 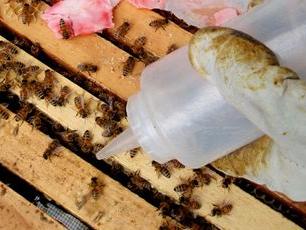 Readers of this blog know that the Sunset hives battle the dreaded varroa mite. Sometimes I think that across the back of every Sunset bee marches a whole phalanx of varroa mites.Why is this so? We’re not sure. We have to admit, we are a little remiss on treatment; we are often short on time at crucial moments in the beekeeping cycle, and so we can’t make it out to the hives when we need to. Chemicals, even soft mite controls like Apiguard, make us squeamish. That means we often don’t treat until the problem is already out of hand.

This fall we tried a little experiment. We used formic acid on Flora a little earlier than we did last year, and slayed lots of mites.

Fauna, we’re sorry to say, seems to have lost her queen. Why? We do not know, but that means Fauna is kaput. So we don’t have to treat her, except to free her of mites so we can combine her with Flora.

Aurora is our guinea pig. She’s getting alternative treatments involving essential oils. These treatments  seem to rely on the medication theory of “if it stinks, it must be doing good.”

We’ve been giving her weekly drenches of concentrated doses of Honey-B-Healthy, which is mostly a mixture of lemongrass and spearmint oil.

The recipe is:4 tsp Honey-B-Healthy1 quart of 1 to 1 sugar syrupDribble one cup per colony over and between the frames

We use a plastic ketchup dispenser to shoot the mixture into the hive between the frames. (That’s the applicator in the photo below. There’s not really any HBH in it. The photo is just to show you what it looks like.) 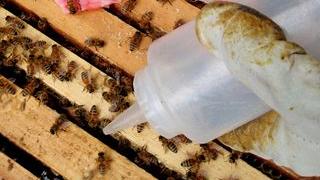 As you can imagine, the bees don’t like it. They sort of slump down in the box, making a low, miserable hum. Some of them emerge and stagger wetly across the outside of the hive, cleaning and licking themselves and each other.

The University of West Virginia maintains that this drench controlled Nosema ceranae in their hives. Although there are few reliable studies done to see if it will control varroa, I can only surmise that the bees, as they clean themselves, must knock some of the mites away. 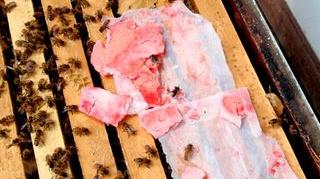 We’ve also put in a LeFore essential oil patty, an evil smelling vegetable sugar-shortening pancake infused with essential oils and minerals. That’s the pink stuff in the photo above. The bees have been working on it for a couple weeks. They don’t seem to like the smell either, and fan like crazy when they’re near it. It’s supposed to help the bees’ general health, and stimulate grooming behavior.

It’s an experiment, folks. We’ll let you know how it goes.

And thanks to Tina Keller, for giving us this stuff to help save our hives!