Trials and tribulations of coop flooring

The flooring of our coop has caused some trouble over the seasons. I've scoured the blog for any mention, but it seems none of the saga e... 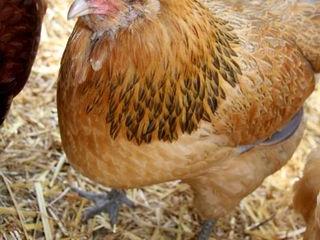 The flooring of our coop has caused some trouble over the seasons. I’ve scoured the blog for any mention, but it seems none of the saga ever made it into a post. The record, then, lives in photos.

This post recounts Ophelia’s crop failure. Notice that the flooring is straw: 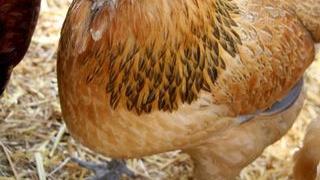 What was omitted from all of that Ophelia drama was that her crop was impacted because she was eating all that straw.

This post was in the middle of the health problems (hence the yogurt regimen and Elizabeth’s daily crop massages) and you’ll notice that the floor is bare. We’d gotten rid of the straw but hadn’t figured out what, if anything, should replace it. 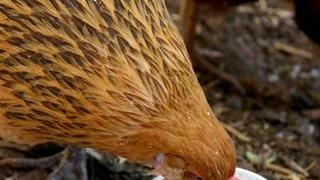 It didn’t take long to realize that bare soil a) gets muddy and messy when wet, and b) smells when pooped on. So by this post, we’d switched to large bark mulch. 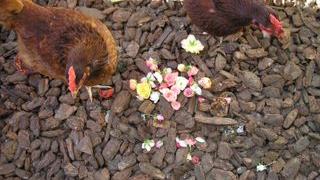 The bark mulch works really well for us. We can add layers to it should it get messy or start to smell, and we can muck it out pretty easily when it’s time to do a deep cleaning. It’s actually due for a mucking. The bark is piled up so high that we’re having trouble opening the door to the coop!

A passerby recently commented that it is cruel to have chickens standing on bark mulch because they can’t scratch and dust-bathe. But actually, they can and do all the time. 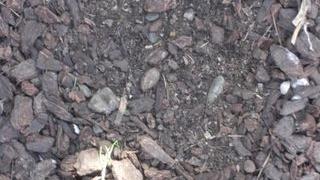 This is the least exciting picture ever, but it’s my proof that the girls can kick the bark and scratch away.

We use wood shavings in the lay boxes because it keeps them nice and soft for egg-laying (less cracking when there’s a fluffy landing). We decided against using them for the entirety of the coop because Ophelia still seems to enjoy eating them. 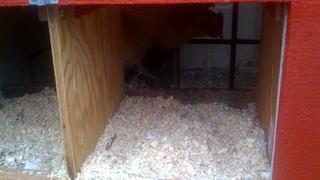 So that’s how we do it. We are curious about how other keepers of backyard flocks handle flooring material. Margo recently learned that the folks at Full Circle Dairy in the San Joaquin Valley house their chickens on SAND!

How about you, fellow keepers of backyard flocks?