To roast or not to roast; that is the question

That is the question that the team contemplated when deciding what style of beer to next create. Our first attempt produced a beer that... 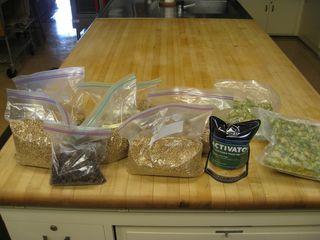 That is the question that the team contemplated when deciding what style of beer to next create. Our first attempt produced a beer that would be considered a white beer sans the traditional spices of a true white beer beer popular in Belgium. 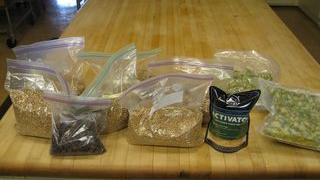 When we malted the barley and wheat grain from our first shot at brewing we did no roasting to the grain except dry it in an oven at a fairly low temperature. This gave us an extremely light color in our finished beer, and when I say light color, I’m talking about a shade or two lighter then the mass-market beers popular with the American public. This time we decided to create a beer with a dark color and a roasted-toasted flavor.

The higher the temperature you roast grain, the darker the color of the finished product. The color of grain used for brewing is measured with a system developed by J.W. Lovibond in 1883 and is appropriately called the Lovibond Scale. The grain color is measured in degrees lovibond, the lighter color being 2 degrees and the highest and darkest color being 580 degrees, which is popularly called roasted. Coincidently, the higher the Lovibond number the more aggressive the roasted-toasted flavor appears in the finished beer.

Some examples would be Miller or Pabst produced with extremely low Lovibond degree grain and on the opposite side of the scale would be Guinness with a rating on the highest level.

We wanted to produce a beer that had a pronounced toasted flavor so we set aside a very small portion of our total malted grain to achieve this goal. Team beer had 13.5 pounds of grain, mostly barley, to make this batch and roasted only about 1/2 pound.

One word of caution if you are going to attempt to make a dark, high Lovibond grain, don’t roast over a pound of grain, for a 5 gallon batch, because too much may produce a grainy, bitter taste to your finished beer and roast the grain OUTSIDE. This type of roast will create a huge amount of smoke so if you don’t mind repainting the interior of your house feel free to do it in your kitchen. The paint store will love you and you will be helping the stressed economy.

The hops that we had been growing for the last two years rewarded us with an incredible bounty so we were excited about adding them to this batch of beer. Because of the variety we had chosen to grow, Nuggets, we knew that genetically the alpha acids, which provide the bitterness to hops, were going to be fairly high so we either had to add a limited amount of hops or we had to create a beer that would be higher in unfermentable sugars. The unfermentable sugars will not ferment into alcohol, so now we can create a beer that will have a fuller body. A fuller body and a higher alpha acid hop combination should reward us with a balanced beer, at least it looks good on paper.

Again, as with our first batch, we were fortunate enough to recruit Chuck Schwalbach, the husband of Diane Schwalbach, one of our co-workers. Chuck, a product design engineer at Apple, has an incredible knowledge of brewing and a vast array of brewing equipment. I think it’s a prerequisite that all engineers must procure the latest equipment available to complete a task.

When the team made our first batch of beer last year we crushed our barley-wheat combination about a month prior to making the beer. This time, Chuck suggested that we crush the grain minutes before we start to brew thinking that it would provide a fresher flavor, plus he had the equipment  to make the process flow a lot smoother. Crushing the grain for our first batch was with a hand crank meat grinder which made the job very tedious and the grind inconsistent. The grain mill that Chuck brought utilized a power drill, as the 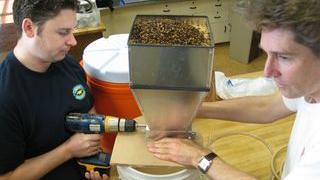 energy source to rotate the grain rollers, which produced a more consistent grind.

The following are the statistics that we came up with in the production of this batch of beer. For some of you this will be interesting, for others, well.

The photo on the left is Chuck and Alan milling the grain.

As stated the total weight of the grain used for mashing was 13.5 pounds. Wheat made up 3.9 pounds of the total weight We chose to use a small potion of wheat because it will produce a nice frothy head when pouring and and it adds a different dimension to the finished beer.

Of the remaining barley, we set aside 8 ounces to roast over mesquite charcoal on a barbaque. The finished roast could be compared to a pale chocolate 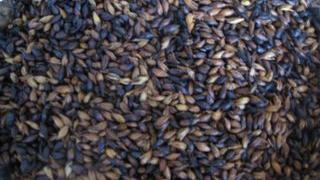 malt. The roasted grains were not one uniforn color but a range of various shades.

Pictured above is the roasted pale choclate malt.

We mashed the grain for 1 hour and 15 mintes using 1 quart of water for every pound of grain. For the sparge, we used 4.4 gallons of water.The addition of hops was interspersed at various intervals. At the start of the boil we introduced 1 ounce of hops followed by an addition of a 1/2 ounce at mid boil and a final addition of an ounce at 15 minutes before the end of the boil.

When the boil had reached completion, Chuck brought out his heat exchanger, which allows us to chill the boiling wort to yeast pitching temperature  within 5 minutes. We’re talking about going form 212 degrees to 75 degrees in a matter of minutes. Amazing! In this case yeast was pitched at 75 degrees.

We used liquid yeast for fermentation. This type of yeast is generally more pure and you have more strains to choose from when developing your beer. In this case it was Northwest Ale, which had a fermentation range of 65 to 75 degrees. This yeast will supply a malty and mildly fruity character with depth and complexity. Our enviorment gave us a constant temperature of 75 degrees to achieve fermentation. 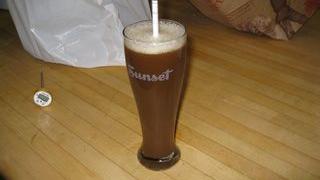 Fermentation started in a little over 24 hours after we introduced the yeast. We racked the beer a couple of times to remove it off of the spent trub and bottled the beer 2 1/2 weeks later. Our next task is to open a couple of bottles and make a thorough analysis of our endeavor.To be continued….