By Margo True, Sunset food editor Egg update: Our chickens, acquired six months ago for the purpose of producing eggs for our One-B... 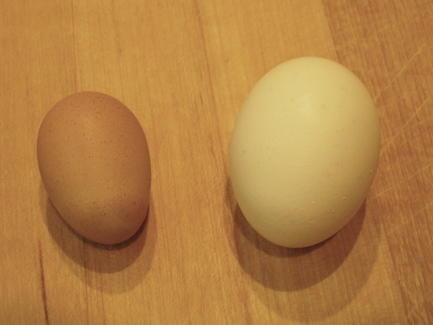 Egg update: Our chickens, acquired six months ago for the purpose of producing eggs for our One-Block Feast, have one by one begun to lay. Ophelia went first, with pale blue eggs. Alana, second, makes soft green ones. Carmelita followed, and hers are reddish brown.

And who turns out to be Layer #4, ahead of our stout, maternal-looking Buff Orpingtons, but Ruby—the chick who almost checked out. Witness her tiny, freckled effort below: 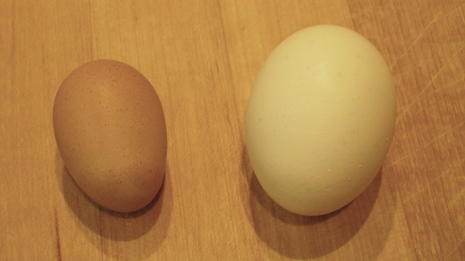 Ruby’s egg at left, next to a storebought egg.

Weight: just under 1 ounce, versus 2 ounces for the storebought. Go Ruby! A milestone in the life of a little chicken.

The funny thing is: She’s been our feistiest hen so far, croaking belligerently at us whenever we enter the coop, checking out the kitchen scraps first to let the others know they’re edible (more croaking), bobbling along right on our heels as we leave (croak croak croak). But now, after creating this one egg, Ruby has mellowed. Not so bossy, much quieter…almost…contented. But then again, I could be reading way too much into this.

Anyway… as long as we’re comparing eggs, here are all four of our layers’ eggs next to that storebought behemoth: 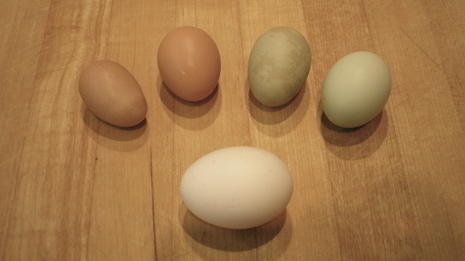