The First Step: What To Eat? What To Plant? 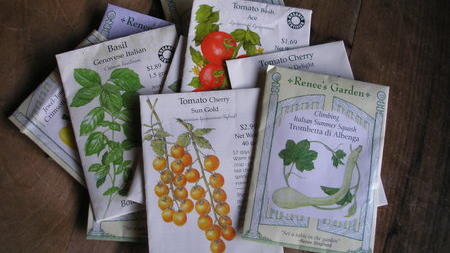 A few of the choices for our summer feast.

Over in the Food Department, we’re dreaming of what to cook (and plant) for our summer feast. Arugula salads with a rainbow of ripe tomatoes, from yellow to orange to deep red. Fresh corn on the cob. A classic California avocado salad with crisp red onions, olives, and parsley. Warm figs. But with what–maybe honey? Or blue cheese? Almost instantly, we’re craving foods that can’t be raised from seed or seedling. We’re so used to getting what we want, all the time.

Even fruits and vegetables get a reality check once Team Garden steps in to look at our wish list. Arugula, it turns out, withers in the heat of the summer growing season; it does best in spring. Our fig vine was pruned so severely last year that it probably won’t bear much fruit in August, not enough to plan on, anyway. Avocados take at least five years to bear fruit. Ah well.

Team Garden is reassuringly full of ideas for what we can grow, though. Tomatoes–no problem, although they’ll be on the small side. Corn will work, but we won’t get the deep, corny flavor that you do in the Midwest; this just isn’t ideal corn country. Ours will be sweet and juicy instead. Chiles might be mild, because our summers are. Potatoes ought to be fine; squashes, too, and a curvaceous zucchini called trombetta (it’s on the right in the photo above). Herbs will take off. Lemongrass–who knows? Fresh chickpeas, which you can nibble right from the stalk, could be a complete crapshoot because it’s very late to be planting summer crops. (Oops.) We’ll just try it and see what happens.

It’s becoming clear that this menu is going to be as light as a little summer dress. We’re starting to worry that we’ll have to go get pizza afterward, or a steak. So, for substance, we’re going to try to raise some chickens, in a spot in the test garden where a koi experiment once took place (they were eaten, I think, by raccoons, and the remnants of their pond are all that’s left behind). We already took a vote as to whether we’d cook these chickens, and we won’t–we’ll use their eggs instead. (Six birds won’t last us long, but dozens and dozens of eggs will.)

We’ll need cooking fat, too. Peanuts seemed easiest–you just whirl them up in a food processor and wait for the oil to separate–but they won’t grow outside a Southern climate. Corn–? Extracting oil from the ears seems impossible and requiring of much intricate equipment. We do have olive trees, but have no idea whether the fruit is edible or how to press it. Time to find out!

What about sugar, for some kind of dessert? Growing sugar beets seems crazy. Sugar cane grows in the south but not here. Honey seems like our best bet. Maybe we’ll think about raising some bees.

It’s coming together. Before long, we hope we’ll have some plants poking up. And some good, fresh food.