By Margaret Sloan, Sunset production coordinator Once your paradigm has been shifted by bees, can you ever recover? If you’ve been stu... 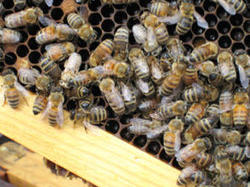 Once your paradigm has been shifted by bees, can you ever recover?

That’s how I felt when, with 3 other members of Team Bee, I visited Randy Oliver’s bee yards in Grass Valley. As we puffed smoke into hive entrances, broke the propolis seal on hive covers, and pulled foundation frames out to examine each colony, I gradually lost my fear and fell in love with these little creatures.

It took us long enough to get there. It’s a three-hour drive, and although we left at 8 a.m., somewhere outside Fairfield, two of the tires on our rental truck suddenly went flat. We spent a long lunch hour waiting for repairs, and around 3 p.m. we finally rolled into Randy’s bee-filled yard.

The first thing I noticed in the yard was a faint scent of honey in the piney mountain air. Then I noticed there were bees everywhere, zipping through the air or hovering about their hives. And yes, I was nervous.

“Get suited up,” Randy told us, and we all pulled on white coveralls and donned little white plastic hats covered with mesh “veils” that zipped to the coveralls. Everyone, that is, except Kimberley, who is brave and wore only a tie-on veil with her regular clothes.

And then Randy, bare-handed and bare-headed, led us into the world of the European honeybee. Team Bee member Elaine Johnson said that’s when she felt her paradigm begin to shift, when she saw how relaxed he was, how relaxed his wife, Stephanie, was, how relaxed everyone in the yard was. The bees weren’t concerned with us. Much.

Randy showed us how to work with the bees, then took us out to the site where he kept his baby nucs (two of these were ours!), and introduced us to the colonies.

To calm the bees, we had to fire up the smoker, a tin can with a spout and bellows that’s full of smoldering grass. A little puff of cool smoke at the hive entrance and the bees retreat. Bees don’t like smoke. Makes them think their house is on fire and they rush to save the honey (wouldn’t you?), leaving you to do the work you need to do.

Bees seal their hive with propolis, a sticky substance made from the resin of trees, so we had to break through this seal with our hive tools to open the cover. Then we could gently break the propolis seal on the frames and lift them from the box to watch the bees as they went about their business.

“Keep the sun to your back,” Randy told us, “and you’ll be able to see inside the comb. You can tell what the queen’s been doing by the brood pattern.” We gently pushed the bees aside (yes, you can do that!). And sure enough, there were baby bees in various stages of development, glistening in their bath of royal jelly. “Look for the eggs,” he said, “like tiny grains of rice in the center of each cell.” But I was too entranced watching a bee emerge from her capped cell.

And then I spotted the queen, her big belly (okay, abdomen) giving her away as she moved languidly from cell to cell, inspecting them before she laid her eggs in them. As she passed through the cover of bees, they all turned to her, petting and licking her, then turning to their hive mates and petting them, who in turn petted the next bee, spreading scent and pheromones throughout the hive. It’s sort of like a royal proclamation that controls the hive. If the queen is gentle, the hive is gentle. “Be nice, girls,” you hope she says. “Go get some nectar.”

Randy works without gloves, and he recommends it. Gloves are clumsy, he says, and increases the danger of killing bees, or, worst of all, harming the queen.

Kimberley was the first to remove her gloves, and Randy dumped a bunch of bees in her hands. They did not sting her, they just crawled on her hands. “It was an amazing, warm, tickling vibration,” she said. “I wasn’t scared at all, just excited.”

Okay, so I never got to the point where I could hold a pile of bees with comfort (or without gloves), but I did love to watch the bees on their honeycombed frames.

And in one hive we found that the bees had drawn their own comb, and begun filling it with honey. Randy sliced the comb from the frame and invited us to have some. It was heavenly—the best honey I’ve ever had.

But eating honeycomb in the field is messy business. Team member Margo True got honey all over her hands. “Then a bee landed on my finger,” she said, “and began licking up the honey. When she was done, the bee just stepped off and flew away with such beauty and grace. I think that’s the moment my paradigm shifted.”

I know there will be days when the bees are cantankerous and cranky. They will probably sting us as we work with them. They may swarm and fly away. But I’ll never look at bees in quite the same way again after being in the hive.