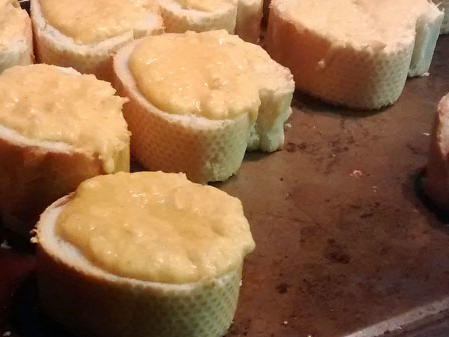 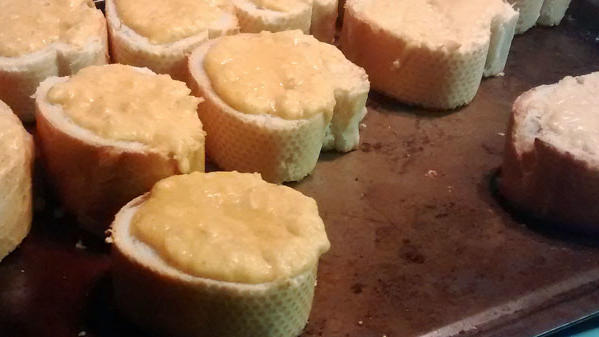 I am not generally known as a cook. When I do tell my roommates that I plan to cook, this announcement is met with a mixture of surprise, disbelief, and fear.

Strangely enough, that’s what drew me to the Sunset Cookbook Club. I thought that maybe, with a little encouragement from my co-workers and culinary wisdom from Deborah Madison, even I could cook something delicious.

And so, with excitement (and a hint of trepidation), I chose my recipe, headed to the store, and invited several friends to come by later that evening to taste the fruits of my labors. Tonight, I thought, I will prove that I can cook.

I chose an appetizer in hopes that even I couldn’t mess it up too badly.

Deborah Madison calls appetizers and first courses “Greetings from the Cook.” I liked the friendly sound of that. At first blush, the Cheese Toasts recipe looked simple and straightforward. The recipe didn’t call for any homemade ingredients (e.g. vegetable stock, roasted tomato sauce), or for any hard-to-find spices.

Best of all, as an unapologetic cheese/bread enthusiast, I knew that I would love the final product. I was sold.

How is it made?

Madison directs the cook to prep two parts of the dish separately, then combine these parts together, spread the resulting sauce on baguette, and then, finally, bake the cheesy bread. I read that I am to begin by “combining the yolk, if using, with mustard and cayenne,” before adding cheese, green onion, and salt.

Wait, egg yolk? I thought. Where did I get the yolk from? After a moment of confusion, I realized that step #1 must actually be separating the egg—into egg white and egg yolk—then placing the white and yolk in separate containers. I wished that Madison had told me that.

(As a novice cook, I live in constant fear of screwing up recipes. Given this anxiety, I prefer those recipes that lay out everything—and I mean ev-er-y-thing—that I need to do to make a dish.)

Once I had the egg yolk in a bowl, I added mustard (one teaspoon) and cayenne (one [accidentally] heaping pinch). I had thought that, with the cayenne pepper shaker in hand, I could flick my wrist above the bowl to add a “pinch” of cayenne. Unfortunately, the large-ish holes on the top of the shaker thought otherwise. 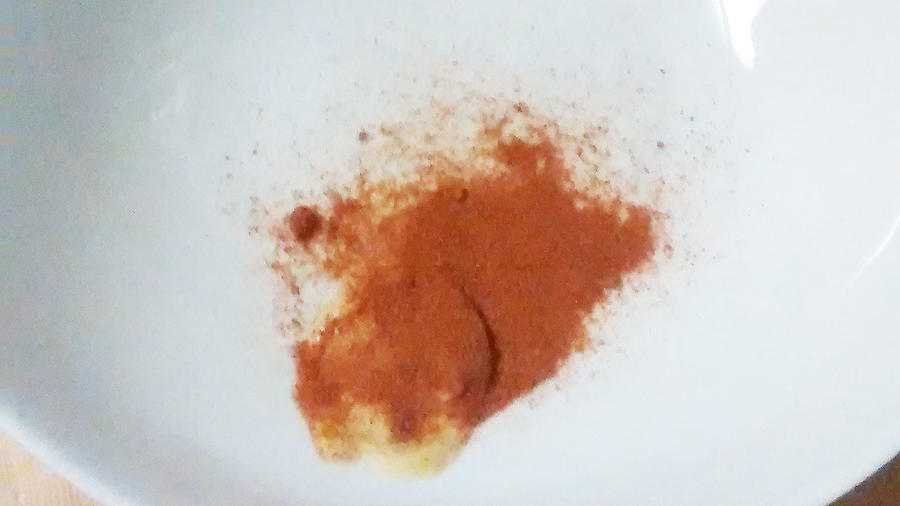 Well, I thought, I guess that these will just be extra-hot cheese toasts!

The cheese was straightforward enough—even I can grate cheese—but I was puzzled when faced with the green onions. I turned to my friend Heather, who’d volunteered to assist me in the kitchen.

“You’re supposed to chop it into really thin slices. It works best if you have a vegetable mincer.”

“In that case, just chop it as fine as you can.”

I wondered, briefly, whether Madison had issued instructions on mincing in the book’s 39 page introduction which, despite my good intentions, I hadn’t had time to read.

Hopefully, my friends would enjoy really tasting the onion.

Once I’d grated the cheese and chopped the green onion as fine as I could muster, I added them to the yolk–mustard–cayenne mixture.

The recipe calls for sea salt, so I added some of my roommate’s very salty-looking salt, with flakes nearly a half-inch wide. The recipe called for “a little salt”—what did that even mean? Well, I thought, I hope I guessed that right….

Next, I turned my attention to the egg white, which Heather had conscientiously been whisking while I’d wrangled the yolk mixture.

I peered into the bowl. The whites just lay there, flat as a stretch of Kansas highway. 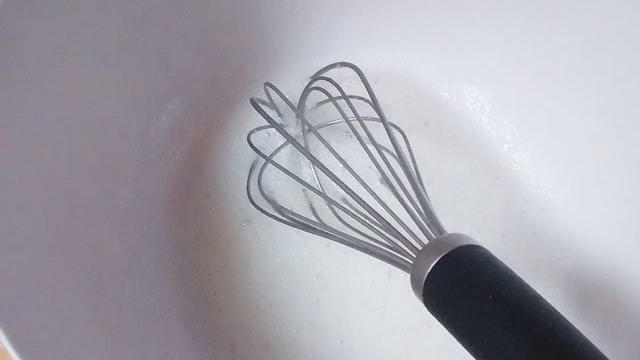 “I think that it’s supposed to ‘hold soft peaks,’ I replied, referring to the recipe.

(Despite Heather’s vigorous efforts, there were no peaks in sight.)

Wanting to save her wrists, we resorted to a hand mixer.

Were we cheating? I didn’t know. The recipe didn’t mention a mixer, but it seemed impossible to achieve the peaks by hand.

Once the peaks were, mercifully, achieved, I combined the egg yolk mixture and the egg whites with a hand mixer (I hoped that’s what Madison had meant by “fold”) and spread the sauce onto the slices of baguette.

Just then, the doorbell rang, and I heard footsteps.

I abandoned the toasts and headed into the living room, to find our maintenance man engaged in a battle royale with my roommates. Evidently, our shower had been leaking into the unit below us all day.

After heated accusations, conciliatory words, and vague nods and grunts of agreement, he left. I returned to the kitchen. Per the directions, I seasoned the toasts with salt and pepper, then put them in the oven.

“It smells delicious,” Heather said. “If only I could take a picture of a smell.”

Marina, my roommate, chimed in, “You know what would be great with cheese toasts? Tomato soup!”

Regressing to my usual ways, I poured boxed soup into a saucepan to heat.

I excitedly set the table and then, at the appointed time, served the toasts. 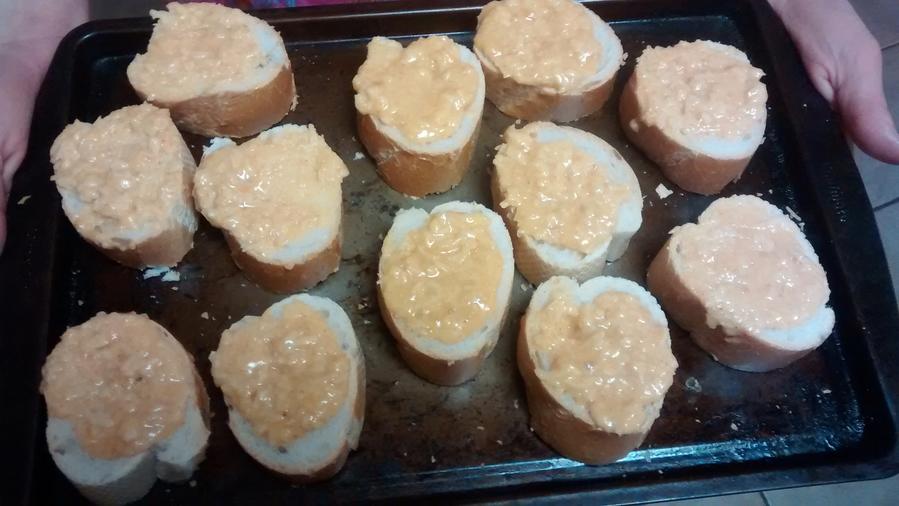 My roommate Jarrett was first to try the appetizer. He bit into his cheese toast, then jumped up from the couch, yelled, “I need water,” and ran into the kitchen.

Other reactions ranged from the brutally honest (“Omigod. I just bit into tons of salt. It hurts!”) to the generously optimistic (“This would be a good bar snack, because it would encourage people to buy more drinks.”)

On the plus side, the tomato soup and the pinot noir received high marks.

Even from my own (biased) perspective, I could tell that this was not my redemption dish. While the baguette itself had achieved a satisfying level of crunch, the heaping dose of cayenne—combined with the thick flakes of sea salt—had completely overpowered (what-I-can-only-imagine-is) the delicious combination of egg, Dijon mustard, cheese, and green onion.

I only wish that I had the time, energy and ingredients to give the dish a second try, with my newfound appreciation for the power of cayenne and salt.

Yes. Between Deborah Madison’s wizardry and those excellent ingredients, I can tell that the cheese toasts could be delicious. The next time I make the dish, I will:

*Control the cayenne. (My mother, an expert cook, advised that I shake the pepper into hand, and then add the desired “pinch” to the dish.)

*Mix with an electric mixer. (I did most of the mixing by hand. I imagine that an actual mixer would allow me to distribute the salt more evenly in the spread.)

*Add the final salt and pepper after baking the toasts. (I added it before I baked the toasts due to the distraction.)

*Hope that there won’t be any unforeseen dinner visitors next time.

I’m sure that this dish can be delicious. Next time, I will read the recipe more carefully and refer to the introduction as needed.

1 egg, separated, or 1 egg white only

Preheat the oven to 400F. Combine the yolk, if using, with the mustard and cayenne, then stir in the cheese, green onion, and a little salt. Whisk the egg white until it holds soft peaks and fold it into the mixture. Spread the mixture on the bread and bake until puffed and golden, about 5 minutes. Season with salt and pepper and serve.