Asian basics for a new cuisine 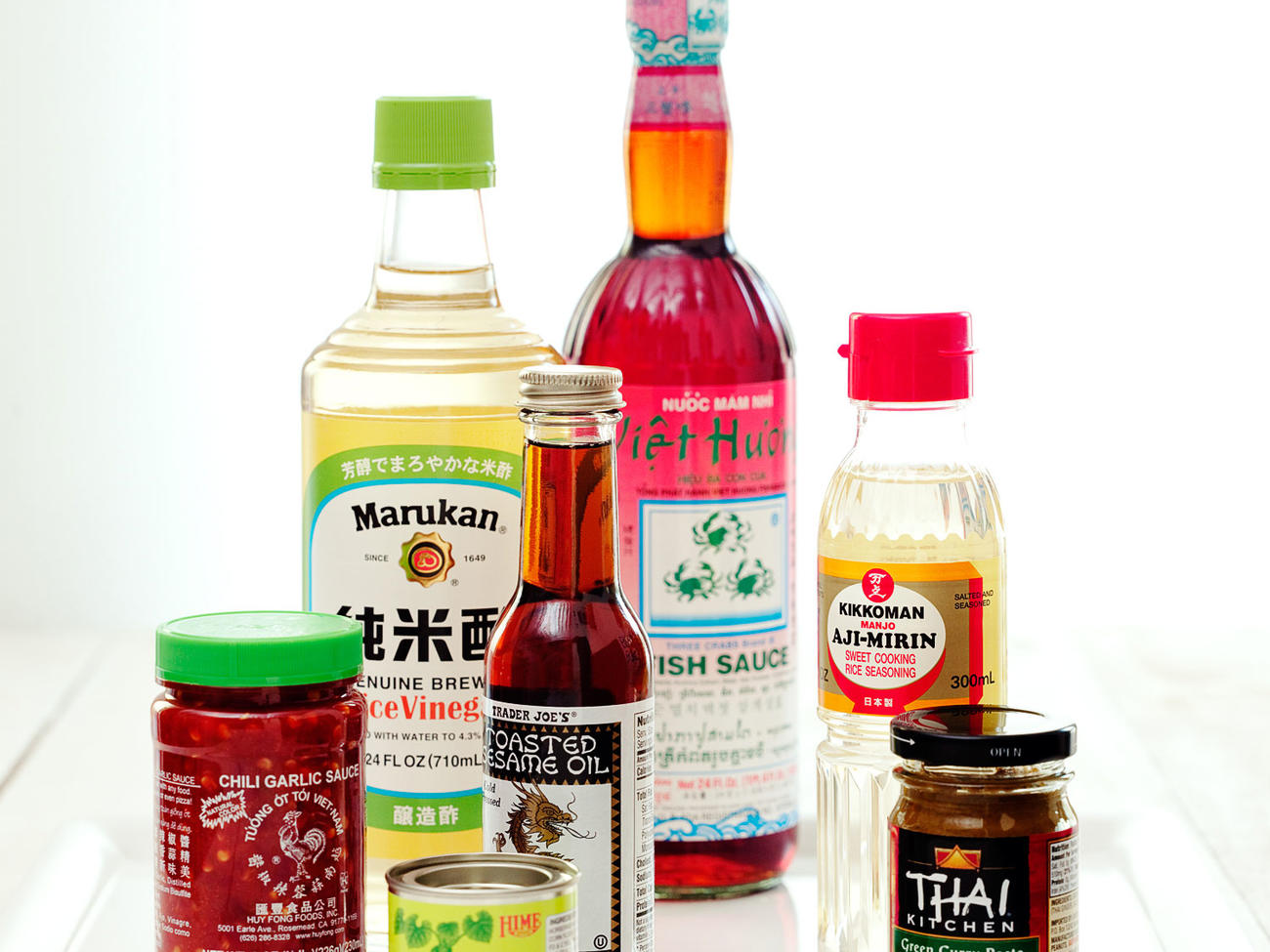 International sections of mainstream urban supermarkets should have most of these items. For more brand choices, shop in Asian groceries.

Use for its rich, nutty, and toasted fragrance. Add at the end of cooking, as heat dissipates flavor and aroma.

Add to salad dressings, marinades, and soups, and use to season vegetables or noodles.

Use instead of salt or as a light-colored alternative to soy sauce, especially in curries, sauces, dipping sauces, salad dressings, and soups.

Use the sauce instead of anchovies in dressing for Caesar salad.

ASIAN RED CHILI PASTE: A blend of fresh or dried hot red chilies and vinegar. The paste sometimes includes oil, garlic, and other seasonings. Heat level varies with brand and country of origin.

Use to deglaze pans in which meat, poultry, or fish has been browned in butter or a mild-flavor oil; reduce slightly to make a velvety coconut sauce.

Use instead of cream in soups and sauces.

Cut in fine slivers and fry crisp. Use to garnish entrees, soups, and salads.

To crush whole ginger, put in a heavy plastic food bag and smash with a frying pan.

Use in stir-frys, marinades, and barbecue sauces; brush sauce on near the end of cooking as the sugar makes it brown fast. Especially good with poultry and lamb.

Mince for stir-frys and curries.

To release the maximum amount of flavor, use a hammer or the blunt edge of a cleaver to crush stalk, then toast with ground turmeric, minced fresh ginger, and crushed garlic to make a seasoning base for sauces and marinades.

Add to crab cakes or cook with pan-browned scallops.

Use instead of lemon juice for flavor in fish marinades where the acid in juice “cooks” the fish, changing its texture and color, such as on tuna.

Simmer with liquid when making chicken or vegetable broth.

OYSTER SAUCE: Thick, brown, salty-sweet sauce made from oyster extract, sugar, and spices. According to David Soohoo, “Chinese call it the magic sauce. It’s one of our secrets.”

Use in stir-frys, marinades, and sauces.

For a flavor jolt, add a little to melted butter or cream sauces to pour over meat, vegetables, or fish.

Add to chicken broth and thicken to make an all-purpose gravy or sauce. ― David Soohoo

Use plain or seasoned on salad greens for a no-fat dressing.

Use instead of butter to season baked potatoes or baked sweet potatoes.

SOY SAUCE: Dark, aromatic, full-bodied sauce brewed from fermented soybeans and wheat. There are distinctive flavor differences between Japanese- and Chinese-made soy sauces, and among different brands. Flavored soy sauces, such as mushroom soy (infused with the essence of mushrooms), have unique qualities.

Use instead of salt in any mixture in which soy sauce’s dark color adds an interesting dimension.

Substitute salt and pepper at the dinner table with soy sauce and chili pepper water.

In dressings made with Asian fish sauce, replace some fish sauce with soy sauce to tone down fish flavor.

THAI CURRY PASTE: A wet paste made from chilies, spices, and other seasonings. There are many types, including red, green, yellow, panang, and Mussaman ― each blend has its own flavor. Comes in packets, envelopes, and jars.

Mix a yellow curry paste with coconut milk to taste and heat to make a spicy sauce. Or marinate split chickens in the mixture and grill. Serve with Thai sweet chili sauce (see below).

Use curry paste instead of curry powder.

WASABI: Powerfully pungent, hot green horseradish. Available as a dry powder or paste in a tube. Mix powder with water and let rest for 10 minutes for flavors to “bloom.”

Use as you would horseradish or hot mustard.

Add dry powder with dry ingredients for sauces and in baking.

Use in broth for poaching oysters.

ALSO IN THE RUNNING

COCONUT OR PALM SUGAR: Comes in hard chunks to crush or melt. Tastes like sugar boiled with water until thick enough to harden.

Kitchen Nightmares No More: How to Tame Your Most-Used Room

9 Healthy Kitchen Staples That Cost Under $1 Per Serving