From Sausalito’s own One-Block Party team, a mid-May update on their gardens—already lush, green, and bountiful—and their tant... 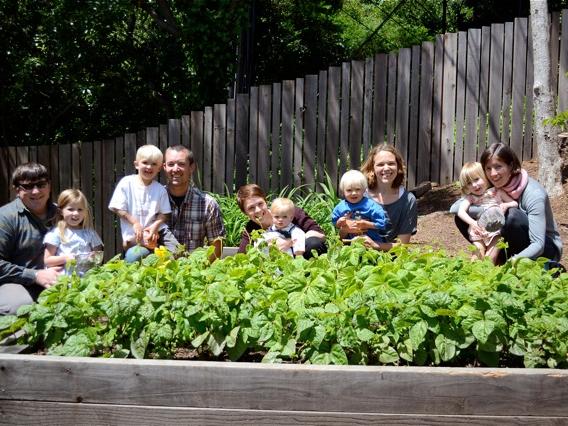 From Sausalito’s own One-Block Party team, a mid-May update on their gardens—already lush, green, and bountiful—and their tantalizing plans. 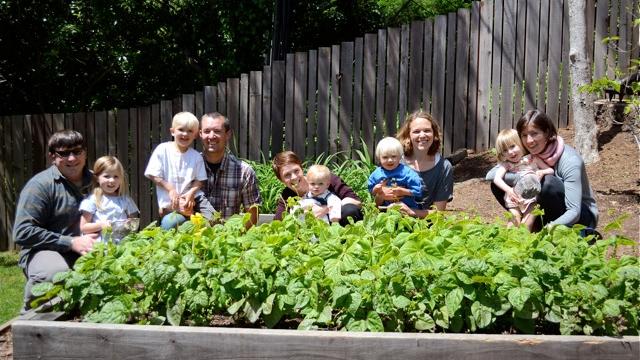 We’ve been having a blast with getting our gardens and team going this spring. In the Peterson/
Macievich backyard, our beans, potatoes, tomatoes, salad greens, and squashes are all going gangbusters. My new favorite veggie? Radishes!! They are so easy and quick, and they come in such pretty colors. The perfect crop for preschoolers. I can’t believe it took me this long to start growing them—I’m going to have them every year! We are already on our second seeding of them, and we’ve been eating tons of salad too. 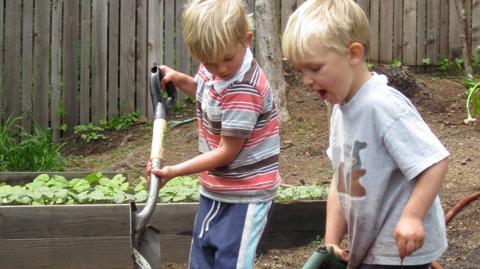 I am worried about our lemon tree. We had many flowers last year but only a few lemons, and I think it might be a pollination problem. I think we’re going to try planting bee-attracting lavender near the tree to try to rally interest. We have lots of lovely citrus blossoms right now, so c’mon bees. 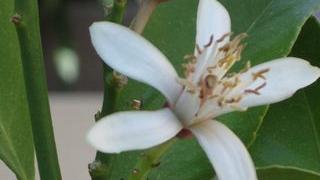 The biggest surprise here is our potatoes. We went to a pick-your-own-pumpkins and dig-your-own potatoes farm in Petaluma last October. Of course we came home with tons of potatoes because Paul and Walt were so excited to be digging. Not all got eaten right away, so when they sprouted, I just stuck them in the ground not expecting much. But they went crazy! And last week, I noticed a potato peeking up out of the ground—so exciting! I figure it’s like icebergs: if there’s one peeking out the top, there must be tons more hidden underneath! 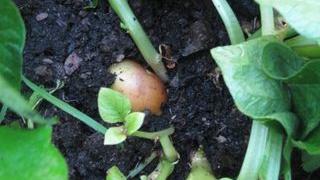 A potato peeks up.

Over at Whit Halvorsen’s house, her sweet chicken Martha had a procedure for an impacted crop. Poor thing. She made it through the surgery okay and Whit may try to give her some antibiotics for the next few days. (Whit’s neighbor is a nurse and experienced chicken-keeper, so she did the operation.) 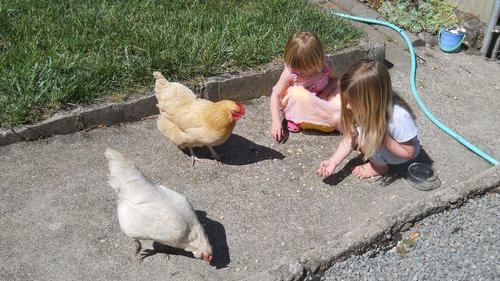 Marin and Anja Halvorsen with two of the the family chickens, Sam and Lucy.
Chicken Martha (not shown) is recuperating.

Whit’s herbs, peas, tomatoes, and salad greens are going great, though! And Whit’s husband, Todd, has been making all kinds of fishing and charcouterie plans with Alex. Our family and theirs are sharing a lamb from a farm in Dixon in a few weeks, and the boys want to try to get together to make lamb sausage.

Will Flanders and Alex Kinnibrew and their daughter Azalais are on our “team vinegar” and are very excited to get rolling with that in a couple weeks. Will has a friend who owns a wine shop and is always bringing over half-bottles of extras from his tasting, so that’ll make perfect feedings for the vinegar crock! They are also growing GORGEOUS strawberries in pots on their deck. And Will is my husband Alex’s brewing buddy.

More news: Our dear radish-obsessed friend Anna Hewson is headed back home to London with her husband and son next week—several months sooner than she thought for work reasons. So she’s missing the heart of the contest—and we’ll be missing her! We’ve asked our neighbor Frank Pacoe to join our team in Anna’s place. Frank is an amazing home cook, canner, and kitchen tinkerer. He’ll be key in the jam- and cheese-making we’ve got planned in months to come. 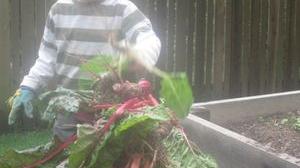 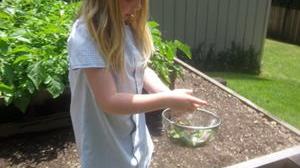 We had a team party here in our backyard yesterday to meet up, talk over plans, and play. The dads discussed going poke-poleing for monkeyface prickleback eels along the waterfront. Todd has some experience with this, and I guess the time to go is a minus tide, or as low a tide as possible. Alex, Todd, and Will brewed an IPA yesterday afternoon during the party, and everyone sat around the turkey fryer in the backyard, shooting the breeze while the kettle of beer bubbled away. It was quite idyllic. 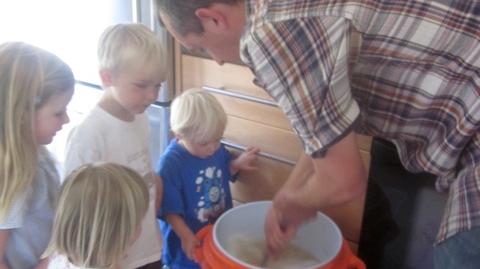 The brewing photo above is from the mashing step, when you add the malted barley to warm water to convert the starch to sugars. Later, the mix goes in a kettle with the hops.

A few lessons from our early spring projects:

• The biggest danger to our strawberry crop isn’t the birds or the slugs but the two-year-olds. They are just so eager to pick, even the green ones!

• Thinning carrots and radishes isn’t worth it. We lose plenty enough with kids on the scene.

• You’re never too young to learn the beauty of fermentation. (The kids got to sip a bit of the sweet malted grain mixture—delicious.) 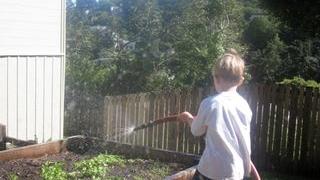