Organic Donors, so named because the team's dream is to grow enough food to donate to food banks, is based in Aurora, near Denver. At 5,... 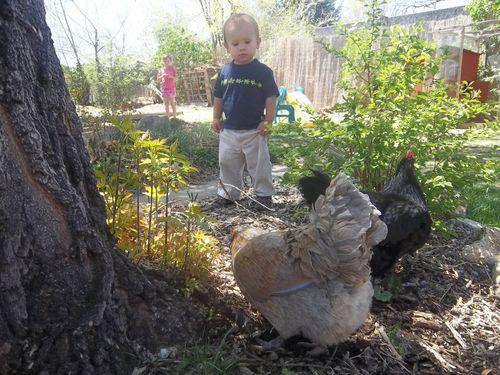 Organic Donors, so named because the team’s dream is to grow enough food to donate to food banks, is based in Aurora, near Denver. At 5,680 feet above sea level, its elevation poses challenges not faced by any of the other teams in this One-Block Party contest—including subzero weather this summer! Among its many members are cheesemakers, beekeepers, vinegar-brewers and chicken-raisers. This week, we’ll catch up with the team’s subsequent summer adventures as they head toward their One-Block Party this Saturday, September 24. 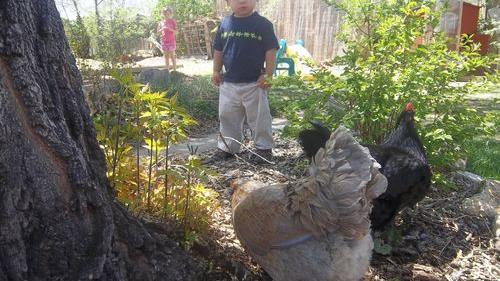 Harper, my son, and Sophie, my daughter, with Sylvie
(the black hen and gentle queen of the pecking order) and Millie.

Lessons in Leadership from Chickens (and a Cat)

Sylvie and Tallulah, part of our original bunch of chickens, are both two years old. They have four new flock mates, one the same age—Millie—and three who are just five months old, whom we have finally mostly integrated into the flock.

Sylvie is the head chicken (we think). Even though she is very mellow, the others tend to follow her lead. Tallulah is a bully. She keeps the little ones in line by chasing them, and they all run around squawking and flapping. She does not like to be held and is sometimes hard to coax back into the run. She even pecks at our kids. The little hens, on the other hand, are much sweeter and don’t mind being picked up and cuddled. And one of them, Millie, apparently has a crush on our gray cat and follows him around, much to his annoyance.

All our hens lay light brown eggs (the little ones aren’t laying yet, but we think they’ll be putting out brown eggs too). We feed them pellet feed (we alternate inexpensive and organic), scratch, kitchen scraps, worms and weeds. When we toss berries or cheese (or worms!) into the run, the girls go nuts, clucking and jostling each other to gobble up the treats. The hen who scores the choicest treat seems to be regarded with respect from the others afterward. 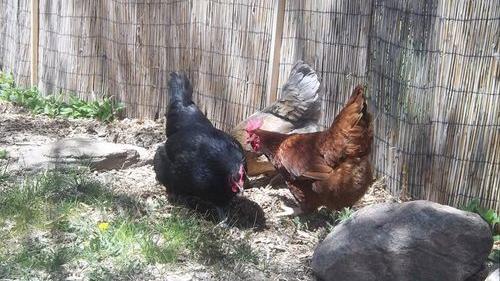 Tallulah, our wannabe boss-lady, is the red chicken
in front. She’s always ready to pounce.

By Clea Edelblute, Team Member and author of The Way of the Hen: Zen and the Art of Raising Chickens