The prawn tank (right) and the hydroponic garden it fertilizes.   After Max, team leader of the Bad Skunks, described her team’s ... 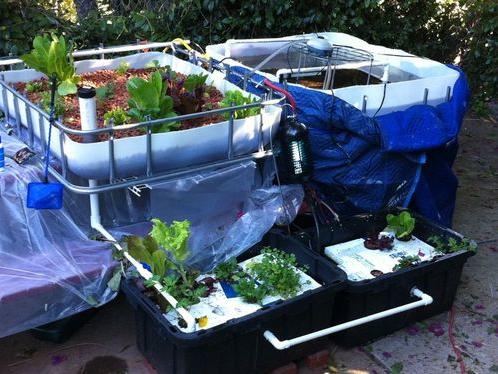 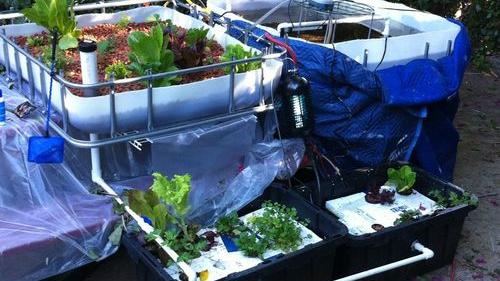 The prawn tank (right) and the hydroponic garden it fertilizes.

After Max, team leader of the Bad Skunks, described her team’s latest food project—raising prawns in the backyard—we had to know more. Team member Tino was the mastermind behind the whole creation. In her words, here are the details of the Prawn Pad’s construction.

Sunset: You have goldfish living alongside your prawns, because their poop—transformed by bacteria—apparently provides nutrients for the prawns (and the plants). Yet you had to keep them separated at first. Why? And how did you do it?

Tino: Both prawns and goldfish are both omnivores. The separation (a screen window I put together from Home Depot) was intended to keep the goldfish from eating the baby prawns. But once water was in the tank, it bulged out a little bit, and a gap emerged. I tried to compensate for the gap by attaching a window box liner to the screen (probably not the sturdiest solution). But the fit still wasn’t tight enough to keep the fish and prawns on their own sides. Luckily, the prawn nursery sent a couple hundred prawns that were mostly an inch long (rather than the half inch I was expecting) so it wasn’t a total disaster.

S: Who knew goldfish could be a threat to anything? Well, it’s good that your prawns were apparently too big to swallow. Where does this miraculous poop-transforming bacteria come from? Do you have to sprinkle it into the water in powdered form?

T: The bacteria grows where it grows (side of the tank, on the pvc pipe, etc.) and it converts the poop as it floats freely around in the water. No shaking necessary.

S: You said you hoped at least 30 prawns would survive long enough to make it to the table. Were you worried about something else besides voracious goldfish? Are prawns inherently fragile or something?

T: The prawns are very territorial and like to kill and eat each other. So for the space I have available, 30 to 40 making it to harvest time without being eaten by their compatriots is about the best I can hope for. And these prawns are huge! They can get to 8 or 9 inches 160 days after they hatch. But I expect they will be about 6 inches by the time we harvest, so 3-4 per person should be plenty.

S: Good grief, 8 or 9 inches? I thought prawn was just a term for a large shrimp. But this is beyond large.

T: The prawns are actually called Malaysian Giant River Prawns, so not only are they prawns…they are GIANT prawns.

T: Something about this system I didn’t realize before I started is that I really cannot check the progress of the prawns. I can’t see through the netting on the shelving system I made, and they really love to hide. So I can only see the 5 or 6 of them that have decided to take up residence in and around other objects in the tank (a flower pot, a metal rack for the pump and aerator, the hole for the drain). So I have this fear that September will come, and I’ll drain the tank, and only the 5 I’ve been seeing all along have made it…

S: We can’t wait to hear how this turns out. If anyone reading has other questions about the Malaysian Giant River Prawn project, you can ask Tino right here.