Small hive beetles are the newest pest in our beehives. 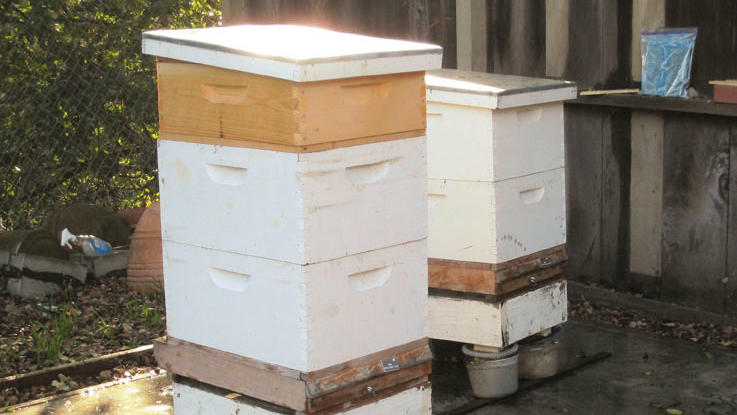 Just in time for Halloween! The newest uninvited guest (pest) in our hives is the small hive beetle (SHB), a nasty little beetle that eat…

Just in time for Halloween! The newest uninvited guest (pest) in our hives is the small hive beetle (SHB), a nasty little beetle that eats brood, bees, and comb, and destroys the honey in the hive.

SHB is a relatively new—and serious—pest for the bees, and until recently not widely seen in California. Beetle populations can build up so fast that beekeepers don’t notice until it’s too late. Earlier last week when we opened Veronica, we saw over 30 beetles crawling on just one frame. The sticky board below poor Betty was literally crawling (scary movie kind of crawling) with larvae hoping to drop down to the ground and finish growing into beetles in the soil below the hives.

The bees do kill the beetles when they can catch them, but they can’t keep up with such a population explosion. They need our help.

We’re trying to avoid using harsh pesticides in our hives, so we decided to use a Sonny-Mel style SHB trap. It’s a plastic sandwich container filled with mineral oil and baited with a noxious glop made of rotten banana peel, cider vinegar, and sugar.

Supposedly, the beetles, hypnotically drawn by the glop, enter through small holes in the plastic container and drown in the mineral oil. (There’s a great how-to video at one of our favorite bee blogs, Linda’s Bees.)

We hope this works, but so far we haven’t trapped more than a couple. These beetles are disgusting.