By Amy Machnak, Sunset food writer I started this salt-making experiment by straining the water through a very fine strainer lined ... 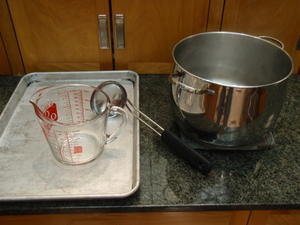 I started this salt-making experiment by straining the water through a very fine strainer lined with coffee filters to remove the sand and any other solids items. Once I’d removed all the physical contaminates from the water, but I thought I should at least attempt to kill any bacterial organisms. Based on what I learned in culinary school, this means boiling. I transferred the water to a large stock pot, brought it to a rolling boil, and let it go for 20 minutes. Meanwhile, I preheated an oven to 275°. I measured 3 cups of hot ocean water and poured it onto a rimmed baking sheet. I repeated this 2 more times, ending up with 3 trays and 9 cups of liquid. I baked the uncovered trays for almost 2 hours. 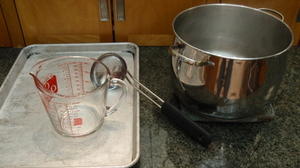 Nothing happened. The level of the water hadn’t dropped at all. I started to doubt whether this was going to work, but decided to increase the oven temp to 350°. 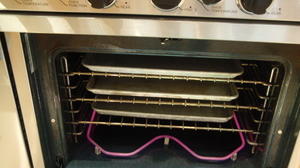 After about 30 minutes, the water line started to lower. I gave it another 90 minutes and sure enough–the water was gone and the tray was covered with a crystallized white film. SALT ! I had done it.

I let the trays cool slightly and then used a metal spatula to scrap the bottom and sides of the tray to break up the crystals. I tasted a very small amount and it tasted like salt. The appearance and texture wasn’t exactly odd, but it didn’t look like what I had imagined.

Granted it was white, whiter than I imagined what Pacific Ocean water would make, but I guess I assumed that it would be fine and sandy like the stuff in the shaker. These crystals were large, flaked, and very irregular in shape.

I later learned that one way to tell whether the expensive salt you buy from the store is processed: All the grains will be exactly the same size and shape. Nature is a little more random.

So how much salt did I get? The total amount was almost 1/3 cup. Not bad for a first try. It’s 90° outside, I wonder if I could save 4 hours of oven energy and just stick my trays out in the sun?