For the past two days, Ruby—our perkiest Rhode Island Red hen—has suddenly declined. This morning, her abdomen was truly swollen. It ... 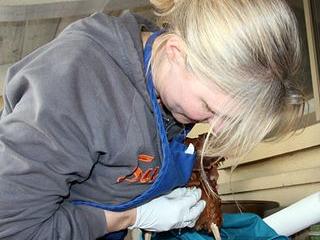 For the past two days, Ruby—our perkiest Rhode Island Red hen—has suddenly declined. This morning, her abdomen was truly swollen. It seemed to have doubled in size overnight. And her vent was totally caked.

So, suspecting she might be plagued once again by the pasty butt condition that nearly killed her when she was a chick, I applied warm and soothing towels (thank you for your advice, Amy). 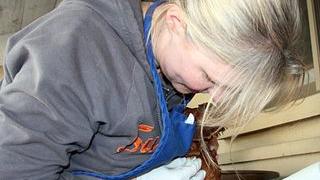 Remembering Amy’s other piece of advice about a potential stuck egg, I massaged her vent a bit with mineral oil. (Plastic gloves come in handy for this.) I also felt her underbelly for possible stuck eggs, and noticed nothing except tight, squishy swelling. Ruby definitely did not like the palpating of her tight, squishy underbelly.

If not a stuck egg, then what? A wise chicken person on the excellent site backyardchickens.com had guessed, from the photo I’d posted, that Ruby might have an infection.

At Adobe Animal Hospital—where Ophelia was relieved of her impacted crop—she was given exactly that diagnosis.

First she had an ultrasound. For a chicken! Yes. It showed that Ruby was indeed full of fluid. 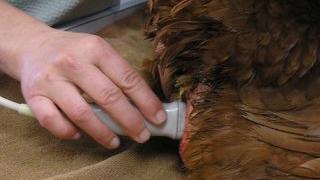 You can’t really see this in my photo below of the ultrasound screen, but I can tell you that there were big dark spaces in her abdomen representing liquid, a serious inflammatory response. 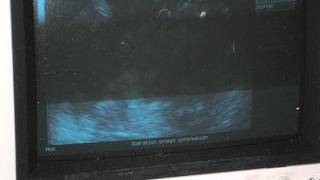 The vet, Kerri Shandro,  withdrew a syringe of very bright yellow fluid and went off to analyze it. 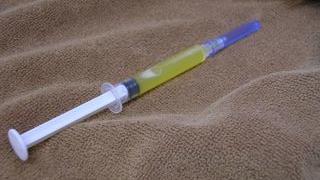 Meanwhile, I kept Ruby calm on her towel-covered examining table. To one side of her was a stack of clean cages filled with small dogs, whimpering a little as they recovered from various procedures. To the other, a guinea pig underwent an abscess removal.

Shandro returned with a probable conclusion: egg yolk peritonitis, which is like appendicitis, only with an egg yolk. In a chicken. Anyway, the yolk somehow escapes the oviduct and bursts inside the abdomen, causing major infection. Possibly it could also be cystitis, or maybe cancer. But that would require some pricey testing off-site, and I declined.

Shandro drained her right then and there. Nearly a cup and a half of liquid came out of that little bird! 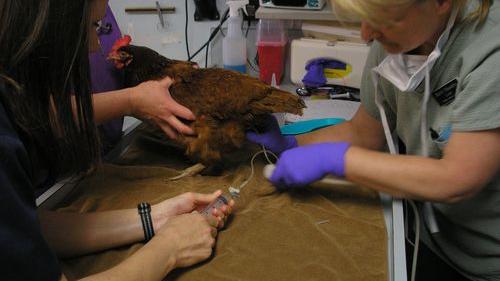 Back at the office, I put Ruby back in the coop with her fellow hens—who, fortunately, didn’t seem the least bit interested in pecking her. (Hens will sometimes do this to a weak or injured member of the group—a less-than-charming aspect of the chicken personality.) She’ll be on antibiotics for two weeks.

I still had to finish my recipe development for the day. Perhaps appropriately, it was an egg dish. 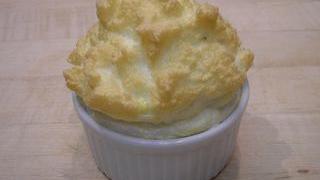 One does what one must.