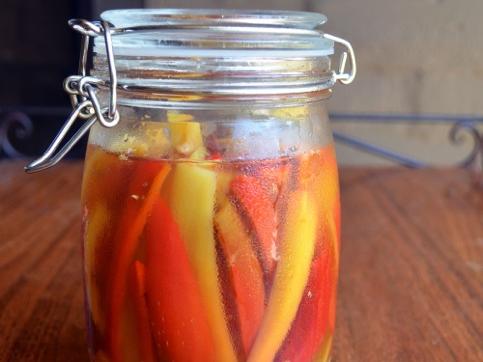 When I moved to the San Francisco Bay Area from New York City ten years ago, I thought gardening was something my mother did. Now I’m a complete convert to growing things, especially edibles.

I have a patio rather than a patch of soil, so I plant in pots—herbs, fruit trees, vegetables…my patio is bursting with them. Nothing beats snipping your homegrown beauties and eating them a few minutes later. So Homegrown, with its combination of how-to-grow and how-to-cook, was irresistible to me.

Why this recipe? I absolutely love pickles, and I love making them. The tangy aromas instantly brighten my mood. Unfortunately I’m pressed for time at the moment, so brine-fermented delicacies like real dill pickles aren’t possible. However! A refrigerator pickle—which doesn’t even require canning—is eminently doable. You just mix up a brine, heat it, and pour it over whatever you want to pickle. Sunset has a nice little collection of quick pickle recipes. But we do not have a pickled-pepper one. So, when I noticed gorgeous, unusual varieties of peppers ripe for the picking in our Outdoor Kitchen garden, I picked a peck.  Actually it was more like 1 pound–I just like the sound of “picked a peck.” Especially since it was peppers.  What was it like to grow the ingredients for your recipe? The book doesn’t actually cover peppers as an ingredient; the pickling recipe called for .”blemish-free vegetables of your choice,” so I went for peppers. Specifically: Emerald Fire (I used red, ripe ones); fleshy, crunchy Pizza; a lovely orange-red variety called Sweet Sunset; and feisty Flaming Flare. Fellow cookbook clubber Andrea Minarcek was delighted by their names. “They sound like nail polish colors!” she said. 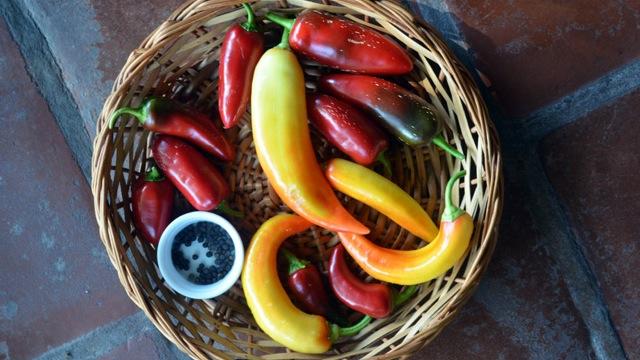 From top right: Emerald Fire, Sweet Sunset, Flaming Flare, and Pizza peppers, plus a few black peppercorns for the pickling brine. (Photograph by Carol Shih)
What was it like to make this dish? Ridiculously easy. I even felt a little guilty about it. How did it turn out? Because I’d neglected to read the recipe until the day before I cooked it, the peppers only marinated for a day instead of a week, as author Heather Hardison desired. And still, they were wonderful. Because I’d used such glorious peppers—some hot, some sweet, some fruity—each one imparted its own cascade of flavors, seasoned by the sweet-tart brine. I managed to save some peppers and try them after a week, and they were even better; the flavors had mellowed, deepened, and mingled. Will I make it again? Without a second’s hesitation. In fact, I’m about to go pick some peppers right now. 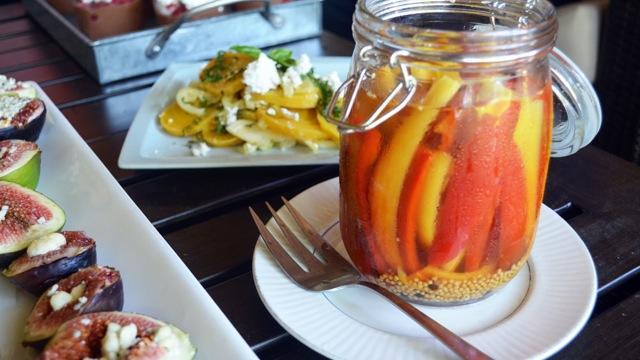 The peppers added a lively crunch to our Cookbook Club lunch. (Photograph by Carol Shih)
REFRIGERATOR PICKLES Makes 1 quart (960 ml) jar “Refrigerator pickles can be made out of any firm vegetables that can be eaten raw,” advises author Heather Hardison. “Carrots, zucchini, peppers, onions, and cucumbers are all good options. Smaller vegetables like green beans can be pickled whole, but larger veggies like cucumbers should be cut lengthwise into 1/2- to 3/4-inch (12- to 19-mm) pieces to make long skinny spears.” An added note from me: Although the quart-size swing-top jar I used was pretty, I would advise going with a wide-mouth mason jar instead. A swing-top leaks when you “shake gently,” as Hardison instructs below. 3/4 to 1 pound (340 to 455 g) blemish-free vegetables of our choice, cleaned and cut1  1/4 cups (300 ml) apple cider vinegar1/4 cup (50 g) granulated sugar2 tablespoons salt1 tablespoon mustard seeds1 teaspoon whole black peppercorns1 bay leaf Tightly pack a clean quart (960 ml) jar with your vegetables. Make the brine: In a saucepan, combine the vinegar, 3/4 cup (180 ml) water, the sugar, salt, mustard seeds, peppercorns, and bay leaf. Bring to a boil and stir to dissolve the sugar and salt. Boil for 2 minutes. Pour the hot brine into the jar with the vegetables, leaving 1/2 inch (12 mm) of headspace. Screw on the lid and shake gently to distribute the spices. Let the pickles cool on the countertop, then refrigerate and let the flavors meld for about a week before eating. The pickles will keep in the refrigerator for 2 months. Excerpted from Homegrown by Heather Hardison (Stewart, Tabori, & Chang, 2015).