Queen cells in the hives, oh no!

While inspecting the hives last week, we found that Veronica and Betty both had built great big cells. Big, sticking-out cells. They lo... 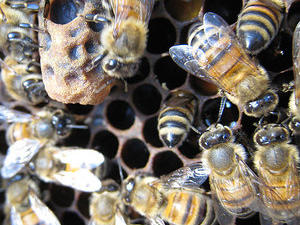 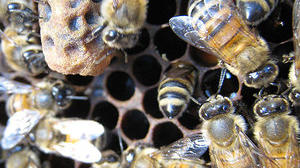 While inspecting the hives

last week, we found that Veronica and Betty both had built great big cells. Big, sticking-out cells. They looked suspiciously like queen cells—the type of cells bees build to hold the larvae of a new queen. You can see the cell on the upper left of the photo at left.

We quickly sent a photo to Tom Vercoutere, President of the Beekeepers Guild Of San Mateo County. He emailed back, saying “What you are looking at is a queen cup. Bees commonly build and destroy these so it doesn’t necessarily mean there is a supersedure (queen replacement) or a swarm eminent. If Betty is “less than great”, the hive may be trying to supersede her. Let them do it.”

Was there a seccessionist movement in their hives? Was a group of bees getting ready to fly off and start a new colony somewhere else? It’s autumn, so it’s not swarm season, but it can happen.

Or were they going to replace their old queen with a new queen? Frankly, Betty’s not a very good queen—she’s been making spotty brood, the hive’s not very clean, and her daughters are sickly. She could stand to be replaced. But Veronica’s been pretty successful. We’d be sad to lose her.

But who knows with bees? It’s like farming a wild animal, something that I think of everytime I open the hives. They’ll do what they want to do, and all we can do is stand by patiently and try not to get stung.