This week we pulled the drone frame from Betty and were astonished to find at least 5 queen cells on the drone comb. You can see ... 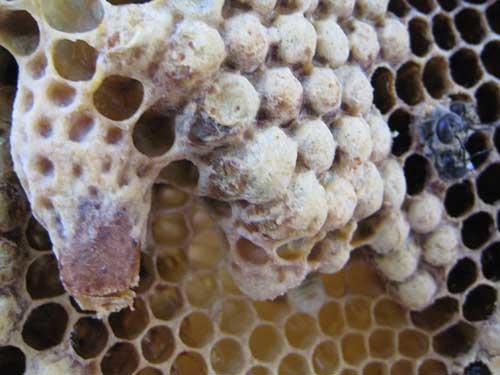 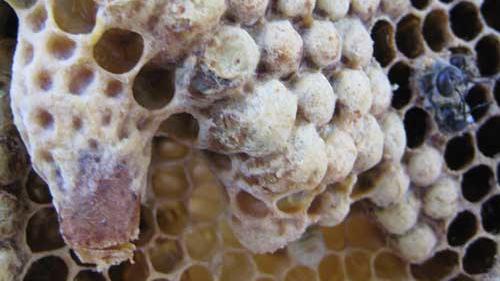 This week we pulled the drone frame from Betty and were astonished to find at least 5 queen cells on the drone comb. You can see one of the queen cells in the left of this photo—it’sthe long cell hanging from the comb face. If you look closely, you cansee that the cap at the bottom has been chewed through to form a little escape hatch. That queen mostly likely emerged successfully on her own by chewing her way out. In fact,it looked like all the queens from that frame emerged successfully,which no doubt spurred our week of swarms.

We had waited the 28 days Randy Oliver recommends for mite trapping, so that we’d be able to kill the drones before they emerged (and in doing so, kill their varroa mites). It was clearly too long to wait.

The hive was filled with drones. Not drones sleeping soundly intheir cells, mind you, but lumbering big-butt drones stomping aroundthe frame like it was some kind of testosterone-infused honey-scentedmale spa. At the right of the photo above you can see one of the dronesmuscling his way out of a cell. Brute.

The drone frame was filled with empty used cells, and more drones were emerging as we inspected the comb. We froze those bad boys, along with their mite load. We made a note to pull the drone frame a few days earlier next time. (I know, this seems cruel, but beekeeping is not all sweetness and honey.) 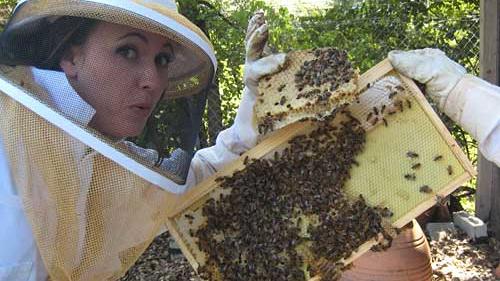 The rest of the frames are full of capped brood, and the bees act like they’re queenright (meaning they have a mated queen): calm and productive. In turning a frame over to look at it, a big chunk of brood fell off the foundation (Brianne, shocked, is holding the chunk). We stuck it back on, but we’re not sure the brood will survive.

At the bottom of the frame, you can see yet another queen cell. We don’t think this one currently houses a virgin queen. But if it does, and if the hive already has a mated queen, she’ll likely chew through the side of the cell and kill her virgin competition.