Putting my ‘game’ face on

I hate when our chickens molt. Why nature insists on this cockamamie ritual once a year is beyond me. It’s a real killjoy around the wate... 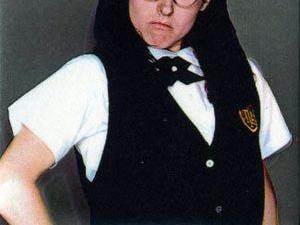 I hate when our chickens molt. Why nature insists on this cockamamie ritual oncea year is beyond me. It’s a real killjoy around the water cooler when membersof other One-Block teams compare the bounty of their projects and we on TeamChicken stand empty-handed. You see, I possess an unreasonable tendency tocompetitiveness, and to hear how productive the other teams are makes medownright envious.

Team Bee? Oh yeah?! Well… flying bugs don’t have an ‘off-season’, they just keep makingmore bees when the old ones retire or get lost searching for nectar—that’s kindof cheating. Team Cheese? Spotlights are on them as they begin testing batchesof all kinds of cheeses. They’re out in the test kitchen now practicing withall their fancy-schmancy equipment. Show-offs. Team Mushroom? The new kids onthe block who got lucky with their first crop. Besides, you’re growing fungus!Hel-looo! My shower wall does the same thing without me having to do anythingat all. And as far as Team Escargot is concerned, all I can say is things aremoving pretty slow over in their camp.

Fall used to be my favorite time of year. The harvest is in full swing and here inthe West our weather is distinctly better than anywhere else in the country:warm and dry. Dinner can be a hot bowl of soup or chili. I can watch football andbaseball at the same time. But ever since we got our chickens it’s now theseason of my discontent. The chickens molt. They stop producing eggs. Theybecome antisocial. Basically the Oakland Raiders of our One-Block Diet league.

At any other time of the year, our birds are exquisite looking. But during themolting season, they’re just freakish. Carmelita, who’s feathers normally are adazzling display of burnt red tinged with metallic greens and blacks now lookslike someone had been preparing her for a stew, but stopped to answer the phone.And Ruby—who has always been the avian equivalent of that Catholic schoolgirlplayed by Molly Shannon—looks like she could use a tinyparka. Her neck is full of empty feather pockets that make her look more like alizard than a hen; not something I want to take questions on at the officeshow-and-tell. 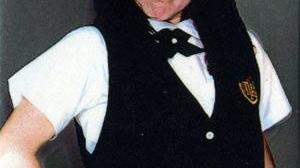 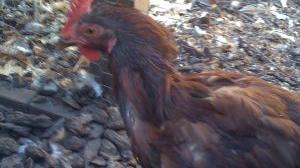 The worst is poor Ophelia. She’s our Ameraucana with the inflated crop. I went outto visit with them the other day and caught a peculiar sight: Ophelia’s moltedcrop. It looks like the bird has a boob. I’m not kidding. One right in themiddle of her chest. And it’s not small either. It’s still covered in feathersbut the sides around it aren’t—or at least there are less of them—so it looksaugmented.

This causes me great stress. The way to treat an impacted crop is you have tomassage it. I don’t think I’m comfortable with that right now. Imagine animpressionable coworker stumbling in on that scene. It would be even worse if theydidn’t stick around for an explanation, slowly backing away as if they didn’twant to interrupt a bit of bird debauchery. The damage it could cause ourinner-office relationship would be irreconcilable.

And to make matters worse, the coop looks like the scene of a recent pillow fight.The floor is covered with feathers. It seems I’m out there every other daypicking up enough plumage to Frankenstein together a completely new chicken. 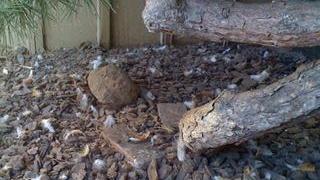 All of this and not an egg to speak of for weeks. In the office, we employ an eggsign-up sheet as a way to gift fellow coworkers half a dozen eggs whenever wefill a carton. Right now tacked over the sheet is a sign that reads “No eggs.Lazy chickens. Stay tuned…” 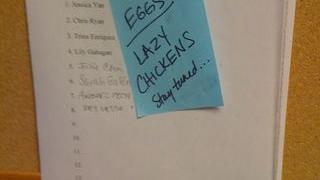 Oh the humility of it all.