By Elizabeth Jardina, Sunset researcher Oh, dear Sunset readers, since we last blogged, our chicks have grown and grown. When I don't see... 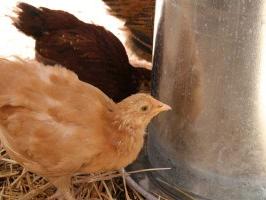 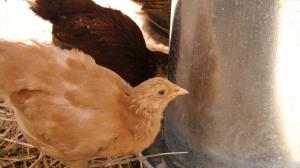 Oh, dear Sunset readers, since we last blogged, our chicks have grown and grown. When I don’t see them for a couple of days, they are visibly bigger.

And they’re adjusting to their new digs with zeal and curiosity.

In addition to their gorgeous coop, they also have an outdoor area, a 10- by 10-foot corner of our test garden, enclosed by chicken wire and a clear plastic roof that lets in light but keeps out rain. We’ve laid straw on the ground to give them something to scratch around in.

The straw also helps absorb their droppings. Adding fresh straw every few days mitigates the ickiness, and a few times a year, we’ll pitchfork the whole mess over to our composting area so the combination of straw (carbon-rich) and chicken manure (nitrogen-rich) can start doin’ its compost-y thing. Free soil amendment is one of the other benefits of having chickens.

Anyway, the chickens have taken to their outdoor paradise like fish to water. Or chickens to a garden.

Ryan Casey, our test gardener, has planted some greens — arugula, comfrey, and sorrel — along one side of the coop, and it took the chickies about three seconds to realize that they could peck at the nutritious greens through the chicken wire.

Comfrey, with its big lightly fuzzy leaves, is a favorite. Although they like to peck through the fence and get a little salad break themselves, anything that a person picks and brings in to hand-feed them clearly tastes better. (I can relate: Why is it that a glass of water someone else fetches for you always tastes better than one you make yourself?)

But leafy greens, while a treat for our flock, are nothing (NOTHING!) compared with the glory that is a freshly shucked ear of corn. They are crazy for corn. Whenever Jim McCann — Sunset art director and General Cluck — goes into the coop, the little chicklets swarm his feet, because they know that he is the keeper of the corn. Bliss!

(I should mention now: Our chickens are, of course, still eating their dutiful diet of “chick starter,” which comes from the feed store in hefty 50-pound bags. These other foods are treats.)

But there’s another treat for the chickens — one that’s almost better than corn. And it’s been growing, as a volunteer, in their coop this whole time. A hearty specimen of fennel, which grows wild along highways here in Northern California, had popped up in that corner of the garden, and Ryan left it as he built the coop around it. 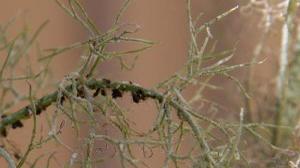 Now, you may be picturing luscious apple green fronds, but this particular fennel is not at that point in the season. It’s been growing under our clear plastic roof, and it’s become infested. (Serious gardeners
should look away. It’s grotesque.)

Aphids, powdery mildew — this thing is sad. And the chickens are positively mad for it. They adore it. They practically knock you down when you step into the coop to persuade you to give them some. Little Ruby loves pecking off the aphids, while the others gobble the fronds down — bugs and all. (We theorize that the the aphids and the fennel create sort of a sweet-savory combination.)

Honey, one of our Buff Orpingtons, will jump up on to your arm for a better position to munch on the fennel.

Readers with chickens, what are some of their favorite treats? What do your chickens go crazy for? 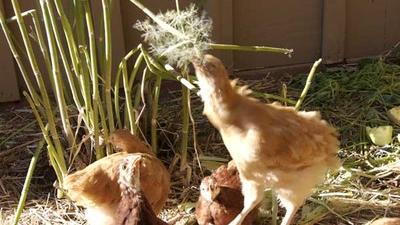