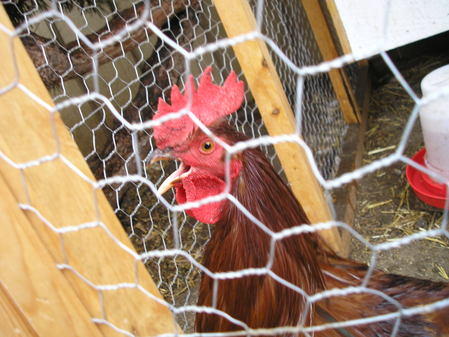 Remember Nugget, our adopted chick who turned out to be a rooster? 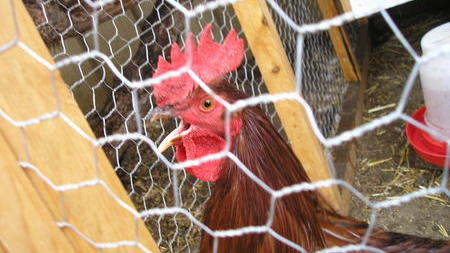 Nugget in full cock-a-doodle-doo, at Sunset back in October.

Well, I’ve just gotten off the phone with the lovely woman who adopted him (she still asks to remain incognito). “You mean the big red one? Yes, he’s still here.”

How is he doing?

“Well, he doesn’t tend to pay any attention to us. But he does like his little hens.”

I flashed on a memory of Nugget, in the week before his exit, energetically hopping on the backs of our hens and ignoring food and water. (The hens did their best to shake him off.) I guess that was just the beginning of Nugget, The Chicken Casanova.

Is he unusually amorous for a rooster? I asked.

“He’s just a young rooster that really likes his hens. He doesn’t tear up their heads or anything.”

Yikes. Apparently this is common behavior in a mating rooster.

What about his feistiness around people? Once he’d discovered our hens, he wasn’t exactly the sweetest creature in the coop.

“To be frank, he’s been drop-kicked a couple of times.” Yow. “Now we’re more dominant than he is. It’s like how you have to be with a very hard-headed dog. You have to be alpha.”

Those of you with fiesty-rooster problems might want to know that when you drop-kick a rooster (says Nugget’s new owner), you have to do it “like you mean it.” It will not hurt the rooster (just don’t go crazy). Roosters tend to calm down after the first year and get easygoing for another three or four; then, depending on the rooster, they go through another aggressive spurt–and some develop a tendency to fly up in your face when they attack. “You do anything you can to discourage that. If he does that, he’s put down immediately. No rooster in the world is worth someone’s eye.”

You also have to respect the rooster as the protector of his chickens, she adds, and not get between him and them. It’s his gene-driven job to take care of them, after all. “Walk easy and do easy.” If you have food, that’s different; you’re best friend to the whole flock, at least for a few minutes.

Every morning, he and his flock of hens saunter out into the 30-acre ranch that his benefactor runs. The day is spent pecking up tasty bits, hopping on the hens, and defending them. Every now and then, the flock crosses paths with a group of guinea hens (apparently Nugget and the Guinea Rooster have gone at it several times; now they tolerate each other). Because of the many dogs around, the chickens are fairly safe from predators like racoons and coyotes. At night they’re enclosed.

And any day now, mini-Nuggets will arrive on the scene. Nugget’s owner has taken some of the flock’s eggs to a school so the kids can see chicks hatch.

So, despite his orneriness, Nugget has turned out to be not such a bad rooster. He seems to be, er, productive. He doesn’t rip up his hens. His owner thinks he’s “cute and pretty.” And he is definitely lucky.