In the middle of November I wrote about Hive Veronica’s unfortunate honeycomb construction. Last week, just before we went on holiday w... 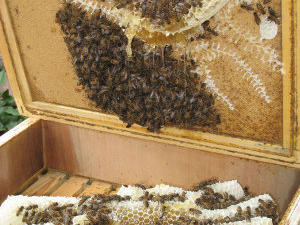 In the middle of November I wrote about Hive Veronica’s unfortunate honeycomb construction. Last week, just before we went on holiday we finally had time to go out the hives and fix the problem.

Veronica is boiling with bees; two boxes chock-a-block full of bees, and a 3-inch-tall spacer box on top of the hive (the box gave us room to put in medication and a hive beetle trap—which did not trap many hive beetles). The bees built comb in the spacer box (it helps insulate the hive), and started filling it with nectar in November. What a mess! 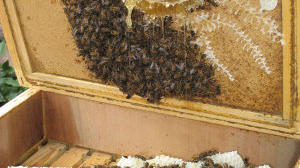 Ok, so it wasn’t a mess until we opened the top of the hive and broke all the comb apart, spilling nectar everywhere. The new comb was well ordered and beautiful (especially to the bees). The poor girls began drinking up the nectar we spilled, and we had to brush them off the comb so that we could take it out of the hive.

Tragedy was inevitable. Bees were doused in honey, some drowning in sweetness. I fished a few bees out of the puddles of goo and placed them on the landing board; they were immediately surrounded by other bees who licked them clean. 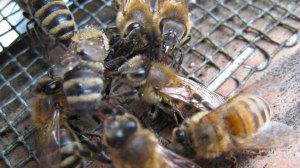 We pulled quite a bit of comb filled with nectar out of Veronica. We’ll freeze this and feed it back to them later in the winter. 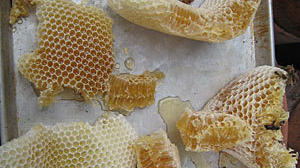 We took off the spacer box, and cleaned her up. Since she’s still in a building mood and she’s honeybound (the frames are all filled with honey, and there’s no space for eggs or brood), we pulled two frames of honey from the center of the box. We replaced them with empty foundation. We’re hoping that they’ll build out comb and Queen Veronica will start laying eggs after the winter solstice.

Hive Betty, poor Betty, who has only 4 frames of bees in one brood box (she should have more), and not much honey stored for the winter, was the recipient of Veronica’s largesse. We don’t know if Betty is going to make it, but we’re going to do everything we can to help her.