From Team Vinegar: Mother, where art thou? 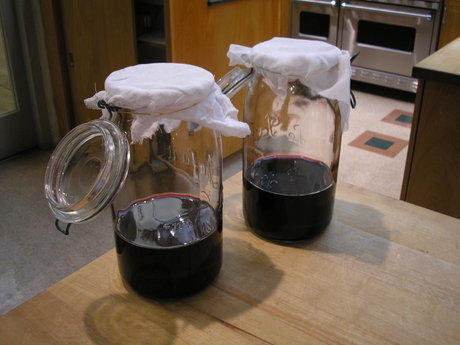 When Team Vinegar huffed its way to the Sonoma mountaintop home of renowned cookbook author Paula Wolfert in February and procured pieces of her precious, 40-year-old mother, we had every intention of being good caretakers of that weird but precious stuff. We meant to feed it with fresh red wine regularly, closely monitor the temperature, and sniff it now and then to make sure it wasn’t starting to smell like furniture polish (the death knell, according to Paula).

Reader, we are guilty of neglect.

Hey, we have busy busy lives! Shoot, we’ve only fed it — by my haphazard records — four times since it came to live with us. Correction: Me. The jars sit in my office, in two cardboard boxes. I have to keep telling visitors that the strange smell isn’t my feet, it’s the vinegar.

Vinegar is supposed to be fed, according to Paula, every 1 1/2 weeks. Yikes. We last fed it on April 1. Here are some photos from that time. 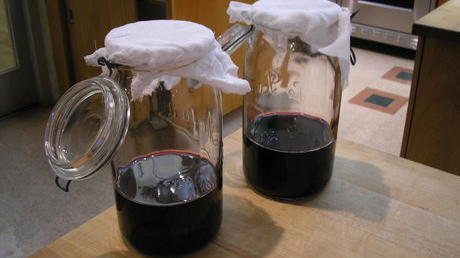 Where are the mothers?

Now, if a developing vinegar is properly fed, the mother will appear on the surface as a thickish, solid layer. She is made up of pure cellulose and acetobacter — a nifty bacteria that converts alcohol into vinegar. By the way, the mother is completely harmless, if kind of slimy. When we’re ready to use the vinegar, we’ll just strain her out.

But I digress. As you can see from our 1-gallon mason jars above, no mother is to be seen. Failure! So many things could have killed this mother–too much wine poured in at one time (thereby “swamping” it), long periods of starvation, we just don’t know.

Then we pulled out our other two jars. These are humongous 3-gallon things we found back in our dusty storeroom. They are very wide, and maybe that is why — as you can see below — the mother has formed a healthy pink presence: 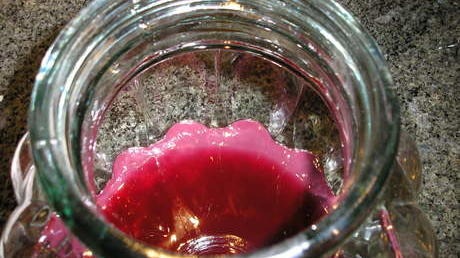 At least two mothers have survived out of four, against the odds. But sometimes the dead spring back to life (at least when it comes to vinegar). We’ll see…we’ll be feeding them soon (the guilt is becoming too much to bear).