By Margaret Sloan, Sunset production coordinator These nasty little beasts are varroa mites. They attach themselves to the bees, su... 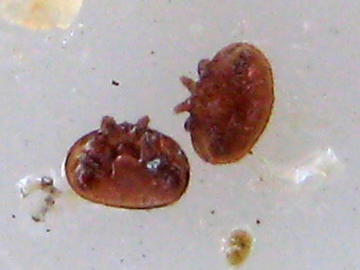 These nasty little beasts are varroa mites.  They attach themselves to the bees, suck their blood, transmit disease, and damage the baby bees in their cells (in a particularly gruesome way.) 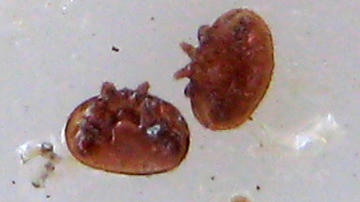 We’ve dosed both hives with Apiguard, a gel that contains thymol. It smells ghastly. The bees hate it (I don’t blame them. I could smell it from four feet away. Pew) and the house bees carry it out of the hive. They track it all over the place, spreading the stink through the colony and killing the mites that are on the bees.

A week after applying the Apiguard, we did a mite count. The stickyboards at the bottom of the hive told the story. Veronica had 84 mites. Poor Betty had over 250 mites.

No wonder poor Betty is so weak. We dosed them with more Apiguard, waited a week, and then checked again. Over 200 mites in Betty. Poor thing. But she’s filled out her first brood box, so we gave her a second box so she could expand if she can.

We’re in the middle of a nectar flow, and Veronica is filling her boxes with honey, but sadly, we can’t eat it, because the Apiguard makes it taste nasty to humans. Evidently the bees don’t care about the taste. Or maybe they just get used to it.