by Johanna Silver, Sunset test garden coordinator Today we did a taste test of the 'Sugar Baby' watermelons. Well, I secretly did a... 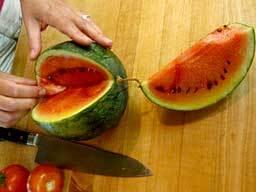 Today we did a taste test of the ‘Sugar Baby’ watermelons. Well, I secretly did a taste test a few days ago because I can’t fathom bringing produce to the test kitchen before trying it myself.

Neither taste test, alone or group, went too well. The watermelons, despite being named ‘Sugar Baby,’ were not sweet.

I chalk it up to the lack of consistent heat in our parts in our so-called summer months.

Regardless, I’m mad. I waited all season for these puppies. I yelled at anyone who put their foot within an inch of stepping on a baby tendril. I coaxed them along. I cooed at the babies as they formed on the vine. And most importantly, I cut down on water to sweeten them up and waited for all three indications that they were ready:

1. The curly tendril on the stem near the point of attachment turned brown
2. The color turned a bit duller
3. The part of the melon that touched the ground turned a creamy, yellow color

What is especially disappointing about a less-than-stellar melon crop is that these are done for the season. Melons won’t keep cranking out on the vine the way cucumber will. And they won’t get any sweeter off the vine (like tomatoes, for example). It’s done. That’s it. Better luck next year.