We’re letting go of the hive-that-used-to-be-Dramatica. She’s the hive that enchanted us when she swarmed three times this spring, an... 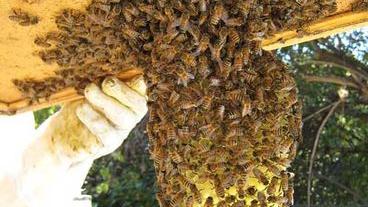 We’re letting go of the hive-that-used-to-be-Dramatica. She’sthe hive that enchanted us when she swarmed three times this spring, and delighted us this summer with her fragrant honey. She’s been through three queens, successively known as Betty, Midge, and now, finally, the infant, unborn Dramatica, killed accidentally while still a larvae. (We named her Dramatica because there has always been somethinggoing on with that hive that was out of the ordinary. It was always high drama in theapiary with those bees.) 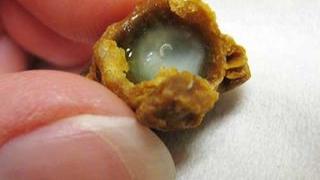 The capped queen cell we found two weeks ago had been torn open. The cell was weird; it stood out from the comb face and was filled with honey on the back side. We took it off the comb, and then discovered there somebody in the cell, bathed in royal jelly. Male? Female? We’re not sure, but it’s unlikely it was a baby queen. (Which begs the question: what happens if a drone larvae grows up floating in royal jelly?)

Last week we decided to let the hive go. We took out some of the frames that had cappeddrone brood, lest all those cells hatch into mite-loaded drones. We left just empty space.

This week we found that the few worker bees remaining in the hive built free comb in the empty space, and, sure enough, the cells are jammed with multiple eggs, compliments of our over-ambitious laying worker.

The bees seem—am I projecting?—sad, confused, despairing, but still doggedly (or bee-edly) going about their bee business. The bees want to persist, but without a queen they cannot.

Veronica is still going gangbusters; we’ll try again to make a split from her next spring.