I’ve been too disheartened to blog. Two weeks ago we found we’d lost Queen Midge. The queen is the heart and soul of a beehive. She ... 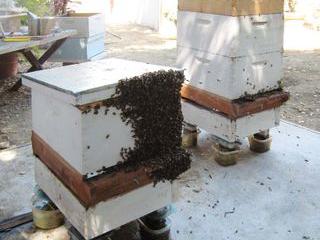 I’ve been too disheartened to blog. Two weeks ago we found we’d lost Queen Midge.

The queen is the heart and soul of a beehive. She lays the eggs to make baby bees, she controls the temperament and mood of the hive, and she gives the bees something to live for. Without the queen, the hive is dead. It’s a very important position.

So it makes some kind of sense that if the queen suddenly goes missing (likely smooshed by bumbling beekeepers), one of the workers will think she has a chance at promotion. She’ll fire up those latent ovaries and start laying eggs.

This never works out. A laying worker, being the required sex (female), is able to produce eggs. But since she never did the big dirty–—mating mid-flight with a drone (male)—all her eggs are infertile. Weirdly, the eggs of a laying worker can hatch, but the babies are all drones. And a hive full of drones will soon starve to death.

That’s what we had 2 weeks ago. A hive full of boy bees who had no idea how to feed themselves, a laying worker that could only produce more boy bees, and a dwindling population of working girls that were enthralled by the upstart queen.

A hive that’s accepted a laying worker is very hard to requeen, so we had to take some drastic measures. We had to destroy poor dead Midge’s hive and replace it with a split from Veronica.

This was complicated. We had to write out a script to keep track of our steps as we worked:1. Dump all the bees from the Dead-Midge hive’s top box into her bottom box.2. From the top box, take out all the brood nest frames (full of drone brood!). Leave 4 frames of honey in the top box.3. Fill the center of Dead-Midge’s top box with 6 frames from Veronica, making sure for each frame that

4. Check that Veronica’s hive still had some frames with eggs, brood, and larvae.5. Take the Dead-Midge hive’s bottom box to the other side of the nursery and dump out all the bees and frames. Leave the frames of drone brood there to die.6. Put Dead-Midge’s top box (now full of Veronica’s brood and eggs) on Dead-Midge’s hive stand, and wait for a week. 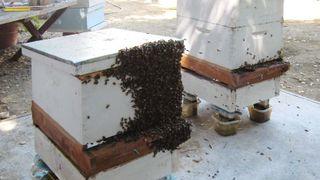 New hive (front) with bees from Veronica (back)The idea behind this process is that the bees taken from Veronica, suddenly without a queen, will choose a worker egg, build a bigger cell around it, and douse it with buckets of royal jelly (a blend of proteins and bee hormones that you, who may have used it as a cosmetic, probably don’t want to know about.) Royal jelly turns an ordinary worker egg into a fully functioning queen bee. With any luck, in a week we’d have a new baby queen. A little larval princess.

The bees from the Dead-Midge hive, dumped unceremoniously on the ground behind our greenhouse, were supposed to fly back to their old home site and merge with the bees we’d taken from Veronica.

And the laying worker? We hoped that she stayed where we dumped her and died (since she had never left the hive before, we were hoping she couldn’t find her way back).

The day after the big reorganization, I collected the drone frames we’d set out to die. An animal, probably a raccoon or opossum, had dragged the frames around the nursery and eaten most of the drone brood. On one frame I found a huddle of bees sheltering a remaining patch of drone brood. This cluster of bereft bees broke my heart.

It’s a cold harsh world in bee husbandry. But at least they don’t squawk like chickens when you kill them.