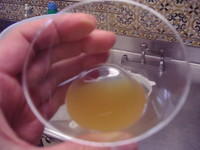 As scheduled, the brew crew assembled Wednesday morning in our entertainment kitchen to produce our first of many home brews. Move over, Budweiser.

The beer, chosen by committee last week, was a honey wheat. It arrived yesterday as a kit via an East Bay brewing supply store. The first thing I did upon opening the box was to start the package containing the liquid yeast. This is done by breaking an inner seal of yeast giving it wort to fuel its appetite.

Everything went smoothly. The kitchen has a huge efficient gas burning stove which rewarded us with an aggressive rolling boil. 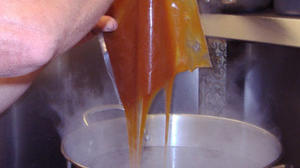 Our 5 gallons of water was boiling in no time. Next, we added the wheat malt extract (at left). At this point we reduced the boil to prevent the extract for scorching the bottom of the pot. After stirring the extract with a long plastic spoon we resumed the boil. After 5 minutes of boil, of the now wort, we added hop pellets (flavoring), which resembles rabbit food.

As stated in the brewing instructions, we added 2 pounds of honey and the remaining hops (aromatics) in the last 7 minutes of the boil.

After an hour of boiling the wort we placed the brew pot in the sink, placed a wort chiller in the pot and packed the sink with ice (good idea, Stephanie) from the nearby ice machine. In about 35 minutes we had the wort temperature from 200 degrees down to 83, which was low enough to pitch the yeast.

We placed the fermenter in the corner of the kitchen, and within 24 hours we had fermentation.