Hops harvest: Preparing for our next batch of beer (plus, don’t forget the Great American Beer Festival, this weekend!)

Just as there are Deadheads who follow the Grateful Dead, Parrot Heads who have a fondness for Jimmy Buffet, potheads who—well, if I ha... 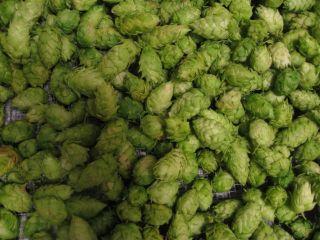 Just as there are Deadheads who follow the Grateful Dead, Parrot Heads who have a fondness for Jimmy Buffet, potheads who—well, if I have to explain…

There are also hop-heads, who have a great affection for hops. 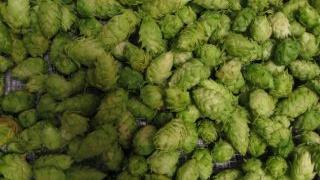 I was amazed to find on the Internet how many home brew clubs throughout the country call themselves the Hop Heads. Interestingly, hop-heads and potheads have something in common. Hops, Humulus lupulus, and hemp, Cannabis sativa, both belong to the plant family Cannabaceae. Small world, isn’t it?

Hops add balance and complexities to beer. They contain alpha acids, which add bitterness. Some varieties of hops have low alpha acids and thus add a subtle nuance to beer; those with high alphas have a much more pronounced presence. Beers with an evident malt flavor require a hop with a lower alpha content to let that style show, and your India pale ale styles require a hop with a higher alpha content.

The first recorded reference to hops was by Pliny the Elder, who died in 79 AD, so hops have been around for quite some time. The first documentation of hop cultivation was in 736.

Sunset’s own hop-heads—hop harvesters, anyway—Stephanie Dean, AlanPhinney and Margo True gathered to harvest our homegrown ‘Nugget’ hops.I tagged along for support and to take photographs.

‘Nugget’ hops are known for their high alpha acid content so they are agood candidate for making a bitter beer or for adding balance to a beerwith a lot of body. They are also known for their herbal, somewhatspicy aroma and flavor. 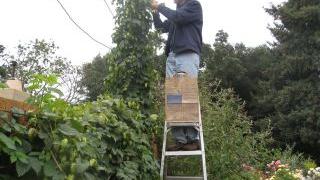 Below are food editor Margo True and Test Kitchen manager Stephanie Dean diligently cutting the ‘Nugget’ flowers from the vines. When you have to harvest by hand it takes a great deal of concentration and precision. 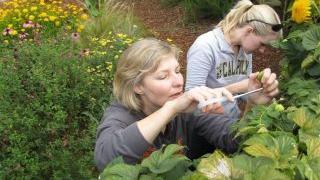 We applied a couple of methods to test the hops to make sure they were mature enough to harvest. One method is to press and release a hop flower to see if it will spring back after compressing. If it does, it’s ready to pick. Another test is to cut a flower in half lengthwise to view the color of the lupilins, the bittering compounds found at the base of each flower bract. If the color is a golden yellow, it’s ready. You can also taste the lupilins to see if they have a distinct bitter taste on your tongue. In the case of our ‘Nugget’ hops, there was a very distinct bitterness so we knew that we were well on our way to harvesting the crop. You also want to pick the hops while they had a green color and not when they were tan or brown.

Because Alan is the tallest of the team, we pinned him to pick the hops on the upper part of the vines, and I might add that he did a meticulous job, considering that he was standing near the top of an 8-foot ladder. Stephanie and Margo, with their feet planted firmly on the ground, harvested the lower growing hops.

Our total bounty was about a pound. When you consider that between 2 to 3 ounces are used per 5-gallons of beer, we have the potential for one hell of a Christmas party.

Here are a portion of the hops that we harvested. Notice thatthe color is a fresh green. Try to harvest your hops when they are thiscolor.

Next: drying the hops. 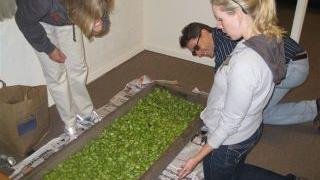 We concocted a drying bed, a 2-foot wide by a 4-foot long frame made of 2-by-4s with a fine mesh screen nailed to the bottom. The frame is set on bricks placed in each corner to keep it off the ground and letting air circulate underneath. We put newspapers under the frame to catch debris, then placed the hops on the screen and spread them out in a single layer. After about a week of drying we used a seal-a-meal machine to bag 2-ounce increments. The advantage to this machine is that it draws excess air out of the bags while it seals so you can retain a longer storage time. I personally have placed purchased hops in Ziploc bags and set them in the refrigerator to store, but after time air always finds a way to enter the bags and impede the freshness of the hops.

In a few weeks Team Beer will be making our next batch of beer using our first harvest of ‘Nugget’ hops!

If you are interested in growing your own hops you’ll have to wait until spring when the new hop rhizomes hit your local home brew store. They are also available online at a variety of home brew supply sites. You should research in advance what type of hops you would like to grow. Do your homework as to what hops will grow best for you. Some varieties tend to sell out faster then others; be diligent with your research and timing.

Some advice: You will get very little hop production the first year after you plant your rhizomes. This is what we anticipated and it held true. The first year our ‘Nugget’ produced virtually no flowers and the hops that did develop were covered in mildew and virtually useless. This year, as I stated, we had a very bountiful harvest. You also need to consider a place where the hops can grow. Hops are a vining plant so be sure to have some form of trellis or pole for them to grow upon. 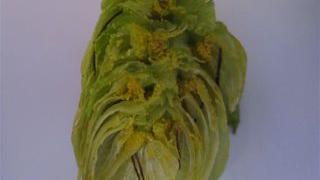 This is a hop flower that has been cut in half. Notice the golden color of the lupilins, the bittering agents of the hop flower.

Good luck all of you hop-heads out there who are interested in trying your luck at growing your own.

Don’t miss: This weekend is the annual Great American Beer Festivalin Denver, which has caught on in popularity since its inception in1982 when there were 22 breweries present. Last year there 432breweries with a total attendance of 46,000. This is the Holy Grail forhop-heads.