Honeybee diseases—I think we’ve seen almost all of them

This is a photo of a frame of brood from Hive Flora. See the black circles? They identify baby bees dead or dying from a variety... 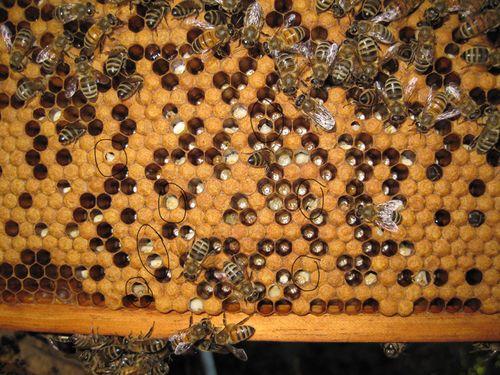 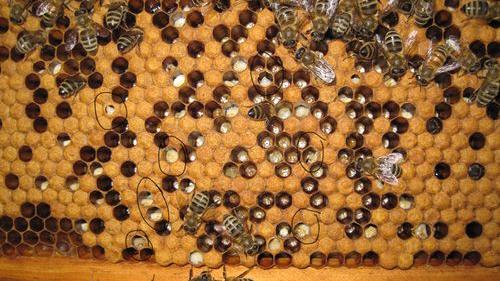 This is a photo of a frame of brood from Hive Flora. See the black circles? They identify baby bees dead or dying from a variety of symptoms. They seem to be infected with a cocktail of Honeybee diseases: sac brood, foul brood, chalk brood, and something that Randy Oliver is calling “slump brood.” Since Flora’s bees haven’t all disappeared, they don’t have CCD (Colony Collapse Disorder), but they might well have the fungus and virus that the army and academic researchers in Montana recently connected with CCD. It looks like Flora has nearly every disease a bee can get.

And of course, Flora’s bees have the ever-present, never-nice varroa mite. We know that she’s got a heavy mite load. You can’t see any in this photo, but those mites are in the hive all right. Clinging to the backs of bees, nestling in the cells with the brood, sucking the blood from our poor bees, and spreading deformed wing virus. Young bees with stunted, shriveled wings walk the combs; they’ll never fly, poor things.

We knew she had a mite problem. We’d seen the signs. But we had decided to try the non-treatment treatment; the all natural way. Let the bees fight for their lives; they could do it, couldn’t they?

No, they couldn’t. Beekeeper Tina Keller sent our photos to Eric Mussen, Apiculturist at the UC Davis Department of Entomology, who emailed back, saying that he has seen this before.

“We called colonies that had brood suffering from various diseases at once “parasitic mite syndrome” years ago.  And, yes, we blamed Varroa. Without the mites, there was no disease.”

So we’re treating. Formic acid for 3 weeks. It’s a bit late in the season. We hope we can save her.